This post is #29 in a year-long series ... Through this series of posts I plan to share our family's experiences during our 17-year-old daughter's year-long battle with brain cancer, which began in February of 2008. My desire is to process through the events of that year from the perspective that a decade of time has brought ... for myself, really. But if you'd like to follow along, you're welcome to join me. 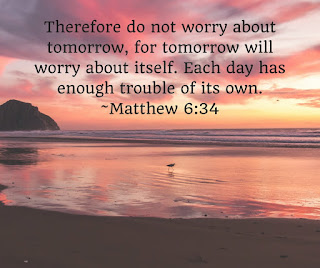 The next few days were spent adjusting to our new schedule of driving to Little Rock for Hannah's daily radiation treatments.  It's amazing how quickly you can adjust to something that's initially so foreign.  Hannah was basically able to keep her typical school day schedule ... I would pick her up just about the time last period was beginning ... we would drive to Little Rock and get her 20-minute radiation treatment ... then we would head home and she would do her homework before going to bed.  On Fridays they didn't do late afternoon appointments, so we would drive to Little Rock with the sunrise in our eyes, and she'd get her radiation completed before heading back to school for the day.

But even as I adjusted fairly easily to the schedule changes, the real battle was raging in my mind.  The anxiety and sense of dread that had first appeared in the pharmacy section of Walmart simmered just below the surface.  I remember clearly how that anxiety ramped up as Hannah lay in the MRI machine for the very first time, and the choking feeling in my heart as the doctor showed us the picture of the tumor invading her brain.

I also remember the release of that anxiety and worry as we prayed together as a family that very first night, placing Hannah's future in God's hands.  I wish I could say that it disappeared for good.  That anxiety and fear resurfaced many times over the next year, with each MRI (cancer parents call that "scanxiety")  and every meeting with the doctors.  There were always so many unknowns ... and what we did know usually wasn't good.

I finally had to make a conscious decision (only by the grace of God) to live by Matthew 6:34: "Therefore do not worry about tomorrow, for tomorrow will worry about itself. Each day has enough trouble of its own."  Our time with Hannah was too precious to spend it worrying about what the next day held.  I resolved to live each day we had with her to the fullest and to savor every moment.  During those days, I couldn't look at the morrow ... it was too terrifying ... and I'm glad that for the most part I didn't waste our time together doing that.

We always closed our emails with the words "God is good, all the time", and we fully believed that to be true.  It was a continuous reminder to ourselves that no matter what the future held, God was still good and we could trust Him.
Written by The Sullivan Four at 8:21 PM