This post is #33 in a year-long series ... Through this series of posts I plan to share our family's experiences during our 17-year-old daughter's year-long battle with brain cancer, which began in February of 2008. My desire is to process through the events of that year from the perspective that a decade of time has brought ... for myself, really. But if you'd like to follow along, you're welcome to join me. 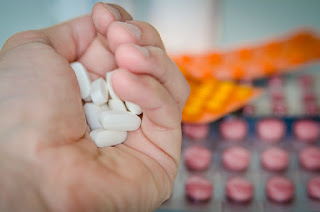 We had left the hem/onc clinic the day before feeling pretty good about the plan of attack.  We had once again had to sit calmly while listening to a litany of potential side effects of the Temodar.  The most common side effects included the following:

So, yeah.  It was chemotherapy, after all.

As we understood it, Hannah would complete her six weeks of radiation and twelve months of taking this drug, and we would be home free.  She would have an MRI every two months to be sure the treatments were keeping the tumor at bay.

Imagine my dismay when I pulled up at the drive-in window of the pharmacy to get the prescription filled only to be told that a five-day supply would be $33,000.  "Ex-ex-excuse me?" was about all I could get out at first.  I had already been on the verge of tears at the very thought of filling a chemotherapy prescription for my 16-year-old daughter, and that put me over the edge.  The pharmacist kindly explained that our insurance had denied the claim, on the basis that Temodar was not an approved treatment for glioblastoma.  He encouraged me to call our contact person at Children's Hospital and have her get in touch with our insurance company.

I drove home empty handed from that first trip to the drugstore, wondering how in the world we were going to do this.  If a five-day supply of Temodar was over $30,000, and Hannah would be taking it daily for six weeks straight, followed by five days out of every month for a year ... well, we would just sell our house, take out a loan, get a second job, whatever we had to do.  Thankfully, our liaison at the hospital was able to get it straightened out with the insurance company, and my trip back to the drugstore later that day was a success.

The proper dosage of Temodar is apparently determined by several factors, including the patient's body weight.  The pills themselves come in a variety of different milligram levels, which must be combined to make up the proper number of total milligrams.  So instead of taking just one pill, she had to take a handful of them.  They were large, so she had to take them one at a time, swallowing each one with water.

During her six weeks of radiation treatments, she took the Temodar every day just before bedtime.  It wasn't fun, but if that's what it took for her to be cured, it would be a small price to pay.

Written by The Sullivan Four at 4:51 PM

Here in the UK all Healthcare is free at point of delivery (paid for via taxation). Having a loved one with a life threatening illness is already so traumatic - I cannot comprehend what it must be like to have to worry about paying for their care as well. ☹️