An Eeyore Kind of Day 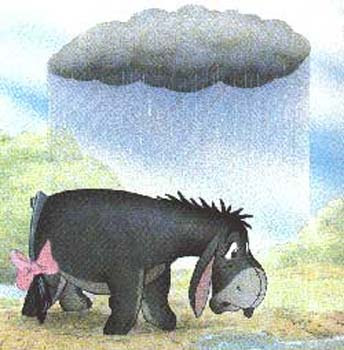 Do you remember the Winnie the Pooh books? Or maybe the animated Disney version of the stories? I loved those books when I was a kid...still do, actually! And the Winnie the Pooh character I've always most strongly identified with is Eeyore. I'm married to a Pooh (Brad's gonna love that when he reads this), I'm the mother of a Tigger (Bethany), and a Kanga (Hannah)...but I'm an Eeyore. I don't really want to be an Eeyore...I mean, who wants to be a gloomy donkey whose tail always falls off and has to be tacked back on...but hey, it is what it is.
Today I'm feeling particularly Eeyore-ish. I've never been a big fan of Valentine's Day...I've always thought it was a conspiracy between the flower, candy, and card making industries to get otherwise sensible people to shell out tons of money for their products in an effort to prove their true love to someone. See, I told you I'm an Eeyore. But even with that in mind, I've always enjoyed the holiday. Nowadays, it just makes me melancholy.
You see, it was three years ago on Valentine's Day that my oldest daughter woke up with a headache. And two years ago, after brain surgery and a year of intensive radiation and chemotherapy, my beautiful, brilliant daughter was bald, nearly blind, and no longer able to walk on her own. And her mind was as simple as a little old lady with advanced Alzheimer's...repeatedly thanking her Dad for the Valentine's roses he had gotten her that day, because she couldn't remember that she had just seen them and thanked him for them thirty minutes earlier. It was just two days later that she left our earthly home for the last time, and ten days after that when she entered her Heavenly home.
Three years since this all began? It doesn't even seem possible.
But here's the thing...God has taken this Eeyore heart and kept it beating through all the ups and downs of the last three years. And every time my tail has fallen off (and believe me, it has!), He has patiently tacked it back on. And He's given me some things that Eeyore never had...the JOY and HOPE that's only available through Him. And for that, even on this melancholy Valentine's Day, I am grateful.
Written by The Sullivan Four at 12:26 PM

I remember coming that morning to wait for Bethany to wake up and remember seeing the roses on the table. What love Hannah shared with all that met her. She celebrated Valentine's day every day of the year. I bet she has received the biggest, most beautiful flowers she has ever saw being with her God. Praying for you.

Thinking of you today Jill, and in the difficult days to come these next weeks. Much love from CT.

Your writing touches me so deeply. As I sit here today, I think of all my sweet friends on 3 Gold who won't see their balloons and flowers but will soon see Jesus. Sometimes it is more than I can take. I am so thankful for your blog....you will never know what it means to me. God bless you today. I will be praying for you.

Thinking and praying for you and your family during this, even more than normal, difficult time of year. I also have that beautiful Hannah in my thoughts.

I can't wait until one day we can be with our loved ones again on all of these occasions. I'm sure Hannah is seeing the most beautiful roses today, and one day you will share that with her again.

I know, 2 post from me in a day, but I just can't stop thinking about you. I am praying hard for you and your family!!!
Love, Kelley