This Is A Four

This post is #20 in a year-long series ... Through this series of posts I plan to share our family's experiences during our 17-year-old daughter's year-long battle with brain cancer, which began in February of 2008. My desire is to process through the events of that year from the perspective that a decade of time has brought ... for myself, really. But if you'd like to follow along, you're welcome to join me. 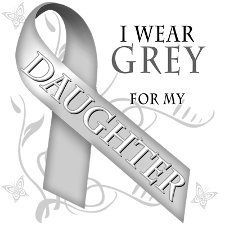 Today, I'm going to share a blog post I wrote regarding Hannah's cancer diagnosis on September 1, 2009, about seven months after she went to Heaven..  It remains a good description of the experiences and emotions that swirled around us at the time of her diagnosis ...

When Hannah was first diagnosed with cancer, it was such an incredible shock that for a few days, I just couldn't mentally process it. At first, Hannah didn't want anyone to know that she had cancer...we finally convinced her that we needed to let people know so they could pray for her. She also did not want anyone to know that she was going to have chemotherapy, so when I sent that first email explaining her diagnosis, I said that they were going to treat her with radiation and "medication." Of course, most people figured out that meant chemotherapy, and eventually, Hannah relented and allowed me to share more details.

I remember when I sent that first email explaining her diagnosis, we received many, many wonderful, supportive responses. In those first few days, we also received emails from children's cancer support groups, some friends who had lost children to cancer, and someone who told me about where to get free wigs for cancer patients. I remember reading those emails and thinking, "No way...this is not for us...not for Hannah!" After a little time passed, I was ready to hear from those folks, but not immediately.

We received the diagnosis exactly one week after Hannah's brain surgery. We had gone in to get her stitches removed, and knew that we would probably receive the results from the pathology report. I remember that Hannah climbed up on the table, the surgeon did a brief exam of her incision, and then he told us that the pathology report indicated that Hannah's tumor was a glioblastoma multiforme. He had told us the day after the surgery that these tumors are rated on a 1 to 4 scale, with 4 being the most serious (at that time, he did not use the word cancer). Brad asked him what Hannah's tumor was, and I clearly remember him saying, "THIS IS A FOUR." I typed it in all caps, because I heard it in all caps.  Those words still reverberate in my head.

Our surgeon then introduced us to an oncologist, who entered the room accompanied by three other people. He gently explained the fact that glioblastoma multiforme is a very aggressive brain cancer with a nearly 100% fatality rate in adults. He also explained that Hannah's youth and the fact that it had been removed put her in a more favorable position. He outlined the course of treatment, which would involve both radiation and oral chemotherapy ... and then left us with these three people, who I later figured out were social worker/counselor type people. I guess they thought we would each need a counselor of our own after hearing that news.

The one who appeared to be the head counselor offered Hannah an assortment of ugly teddy bears, and I remember that she chose what I thought was the ugliest one. As if a teddy bear would fix the problem. We were stunned by the news, but the peace of God was upon us because we had already put Hannah in his hands, and I don't think we even cried while we were there. Once they saw that they were not going to need to scrape us up off the floor, the counselors left too. Then, after all this, Hannah had to roll over onto her stomach and let them pull her stitches out...all I really wanted to do was hold her at that point, but I had to settle for just holding her hand.

We left the hospital that day, went to Firehouse Subs (Hannah's choice), and prayed over our lunch, again putting Hannah's future in God's hands.
Written by The Sullivan Four at 3:25 PM

I'm relating to so much of what you are writing, other than the fact that for us in the early days there were no counsellors and no teddy bears and Leah had a different type of cancer......the roller coaster of hopes raised and hopes dashed and clinging to hope and trusting God through it all and doing normal things like eating in a favourite cafe right after you have been told the worst news ever.

Yes, you do understand, don't you Victoria? I'm sorry that you do ... but thankful that you know the God to whom we cling!