This post is #25 in a year-long series ... Through this series of posts I plan to share our family's experiences during our 17-year-old daughter's year-long battle with brain cancer, which began in February of 2008. My desire is to process through the events of that year from the perspective that a decade of time has brought ... for myself, really. But if you'd like to follow along, you're welcome to join me. 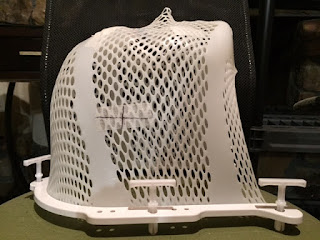 When Hannah was in fifth grade, she was diagnosed with scoliosis, resulting in several visits to the orthopedic department at Arkansas Children's Hospital over a two-year period.  At one of those early visits, she had to lie perfectly still while she was fitted with a brace from her upper chest to her hip bones.  I remember her lying there with silent tears rolling down into her ears as they created that brace ... She was so young, and at that point in her life, this was the worst thing that had ever happened to her.  She slept in that brace every night for two years and it was effective in preventing her spinal curvature from worsening.  What a celebration we had when that chapter in her life came to a close!

A few years later, we found ourselves at the beginning of a new chapter.  This time, we were at CARTI and meeting with a radiation oncologist.  Once again, we watched our daughter, a little older now, lying on a table being fitted with a brace.  But this time the material covered her face and stretched down the sides of her head, ending with plastic bolts which secured her to the table.  If there were tears this time, our view of them was obstructed by the ugly white cage.

After this order of business was completed, we were once again regaled with a litany of possible side effects resulting from radiation treatments to the head.  Some were relatively minor, and to be expected ... fatigue, headaches, skin irritation, hair loss.  Others were more ominous ... development of a secondary cancer in the radiation field, damage to healthy brain tissue, harm to the pituitary gland affecting future fertility, radiation necrosis, and loss of brain function.  Again ... What do you do?  We took a deep breath and signed all the consent forms.

It was explained to us that this would be very targeted radiation.  The beams would be projected into her brain from several different angles, all meeting at the tumor bed.  The objective was to kill any cancer cells that might be remaining and to prevent the tumor from returning.

While she was receiving these radiation treatments, she would also be taking an oral chemotherapy drug called Temodar, which came with its own set of rather unpleasant side effects.  We learned about the blood-brain barrier, which is the body's natural filtering mechanism to protect the brain and spinal cord.  Temodar is one of the very few cancer-fighting drugs which is able to slip through this barrier.

It was a lot to take in.

Her first radiation treatment was scheduled for that coming Thursday at 2:30 pm.  It would be the first of thirty treatments.  This would clearly be a marathon, and not a sprint.
Written by The Sullivan Four at 3:31 PM