A Bittersweet Visit to our Alma Mater 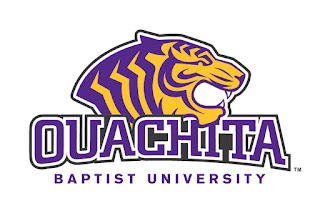 From the time our firstborn daughter Hannah started kindergarten, she knew where she wanted to go to college.  (She was a serious-minded student from the very beginning.)  She had a little "Future Tiger" t-shirt that she wore with great pride, and if you asked her, she would tell you she was going to Ouachita.  In fact, she would tell you even if you didn't ask.

Over the years, she never wavered.  By the time she was a sophomore in high school, she already had her roommate chosen and was looking forward to heading off to OBU in just a couple of years.

All of that changed when she was diagnosed with brain cancer in the spring of her sophomore year.  Instead of graduating from high school in 2010 and heading off to college, she graduated early in 2009 and was promoted straight to Heaven.  And as nice as the new dorms are at Ouachita, there's no comparison to the digs she has now.

Maybe she had such an affinity for Ouachita because she always heard Mom and Dad speak of it with such fondness.  We met there and graduated from there back in the late '80's.  We were excited that our oldest daughter had dreams of attending there ... and looked forward to visiting her in the dorm, hearing her stories of run-throughs, functions, and late-night serenades, seeing her perform in Tiger Tunes, and attending her graduation one day.

We made a trip to Ouachita this week, but it wasn't to do any of these things ... It was to speak to a class called "Death and Dying."  The professor knew our story and was familiar with the While We're Waiting ministry, and invited us to speak to his class.  We readily agreed when we were asked, and have been looking forward to it. 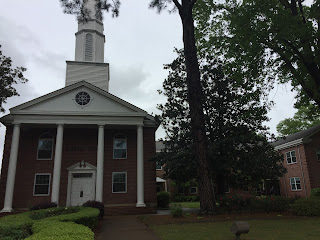 A lot of things have changed on Ouachita's campus since we were students there, but in Berry Bible Building, it was as though time had stood still over the last thirty years.  Other than some updated technology in the classrooms, everything looked exactly the same.

And other than the ubiquitous technology in their hands, the students of Ouachita are still the same.

This group of young adults was bright, kind, and compassionate.  It was a small class, and they listened attentively as we shared Hannah's story and talked about how her death has impacted our family.  They asked a number of insightful questions and even shared some tears with us.  We had the opportunity to share with them how God can bring beauty from ashes and redeem even our greatest losses when we lay them at His feet.  As we talked to them about While We're Waiting, I hope they saw a visual representation of how God can use our greatest pain to lead us to our greatest area of ministry.

Do I wish we had been at Ouachita this week for a different reason than to speak about Hannah's death?

Am I grateful that God continues to use Hannah's story to touch lives?

Written by The Sullivan Four at 8:46 PM 4 comments