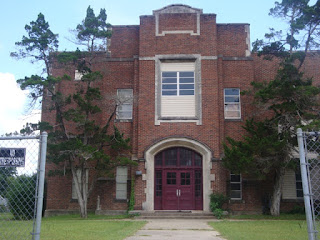 When we lived in El Dorado, Arkansas, our girls attended a magnificent old school called Southside Elementary.  It was built in 1926, and it was an absolute treasure ... at least to those of us whose children attended there.  It was like a school you might see in an old movie, with gleaming wooden floors and stairs that were literally grooved from the footsteps of countless numbers of children.

It was the kind of school where the janitor always sang in the Christmas program, where the first grade teacher had a genuine dentist chair in her classroom and pulled her students' baby teeth, where veterans were honored and hallways were filled with brightly-colored student artwork.

It's where Bethany's kindergarten teacher wrote on her report card, "I love you more than purple," and where she was disciplined for thumping the little boy sitting behind her in the head.  It's where she played the role of teacher in the end-of-kindergarten performance and a pilgrim in the first grade Thanksgiving play.  It's where she had her Most Embarrassing Moment, and was hiding in the bushes when I came to pick her up after school that day. 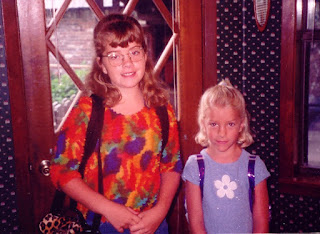 It's where Hannah read so many Babysitter's Club books that she broke every Accelerated Reader record there was and where she met her best friend Brittany.  It's where she became involved in Odyssey of the Mind and won so many spelling bees her teacher finally asked her not to participate.  It's where she got stuck in "The Big Toy" on the playground and had to be freed by a team of custodians.

It's where I picked up the girls on the afternoon of 9/11 and wondered how to tell them that the world had forever changed.

Southside officially closed its doors at the end of Bethany's second grade year and Hannah's fifth grade year.  There was an assembly where all of us Southside families sang, "Good-bye, Southside," and shed lots of tears.  But the building remained standing, and there was talk of making it into something else ... maybe a cultural center or something.  And after we moved, every time we visited El Dorado, we would take time to drive through that part of town, just to see the old building and reminisce fondly.  It was that kind of school. 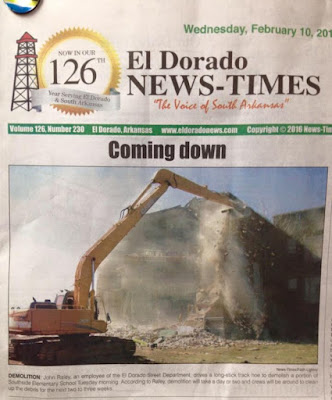 It's just a school.  Just a dilapidated old building in a blighted neighborhood.

So much has changed since Hannah went to Heaven seven years ago this month.  We now live in a different house and drive new vehicles.  We no longer have the jobs we had when she was here, and we no longer have our dog.  Bethany is married and no longer lives at home.  Our focus in life is completely different than it was seven years ago.  We are involved in a type of ministry we would never have dreamed we would need ourselves back when our girls were students at Southside and all was right in the world.

It's just an old school building ... but it's another physical tie to Hannah that's now gone.  And that makes me a little melancholy on this thoughtful Thursday.

I'm so thankful that this world is not all there is, and that I'm tied to Hannah by an indestructible cord of love that will last for all eternity.  What a treasure I have in Heaven!  And that's a tremendous comfort while I'm waiting.

"For we know that if the tent that is our earthly home is destroyed, we have a building from God, a house not made with hands, eternal in the heavens."  II Corinthians 5:1 ESV

Written by The Sullivan Four at 3:43 PM 3 comments