Monday Mourning -- When Your Soul Hurts 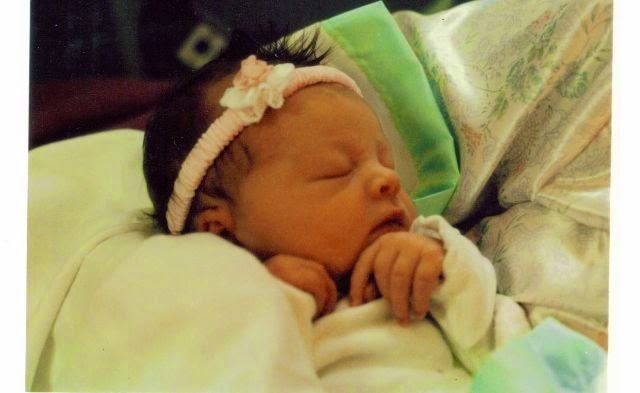 It's October.  Almost the 22nd of October, in fact.  A day that I once anticipated with great joy ... the day I met this little beauty.  She was induced, so I knew when I woke up that Tuesday morning 23 years ago (Did I really sleep the night before? I don't think so!) I would finally get to see our baby for the first time.  To add to the anticipation, we did not know if this baby was going to be a girl or a boy ... something almost unheard of these days!

I remember the doctor exclaiming, "It's a girl!"  Such a joy flooded my soul.  I had only brothers growing up.  I knew nothing about raising girls ... but I was thrilled, nonetheless.

From that day on, October 22nd was a day to look forward to.  Carefully selecting birthday presents, lovingly wrapping them, anticipating her excitement as she opened them.  Choosing a theme for her birthday party, making (or usually buying, ha!) her a cake, sending invitations to her friends.  Watching her grow from a baby to a toddler, a toddler to a child, a child to an awkward pre-teen, an awkward pre-teen to a beautiful young lady.  October 22nd was a joyful mile marker, a date to celebrate another year of our precious girl's life.

On October 22, 2008, Hannah turned 16 ... truly a milestone birthday!  Her gift that year was a bright red Mazda Protege'.  It was a hand-me-down from me, but that didn't matter to her.  She was thrilled!  She drove it around proudly for about four months before she was diagnosed with cancer.  The effects of brain surgery and radiation made her unable to drive and she surrendered her keys without a word of complaint.

Hannah's 17th birthday came around about three weeks after we found out that her cancer had returned with a vengeance.  Three weeks after her doctor, with tears in his eyes, told us that she had less than a five percent chance of survival.  And two days before she lost every strand of her thick, curly hair.  That was a tough birthday.  How do you celebrate your child's birthday, knowing that unless God does a miracle, it will be her last?  Somehow He gave us the grace to get through that day and the months that followed.

Hannah's 18th birthday came around eight months after she went to Heaven.  Oh, how I dreaded that day!  I really don't remember much about it, but I know that Brad, Bethany, and I went to her grave and covered it with rose petals.  I also made a Mississippi Mud Cake, which had become Hannah's annual birthday request once she outgrew the Barney and Barbie cakes.  Over the past several years, those two things have become a tradition on her birthday.  Not exactly the way we envisioned marking October 22nd for the rest of our lives.

That brings us to this week ... the week Hannah would be turning 23.  Twenty-three?  Twenty-three is a grown woman, a college graduate, someone who is starting a career, possibly married, maybe even with a new baby in her arms. It's so hard to see a 23-year-old woman standing in the place of the 17-year-old girl who left us.

I'm not going to lie.  Weeks like this are tough ... even though this will be Hannah's sixth birthday in Heaven.  My heart hurts.  My soul hurts.  Especially when I contrast these October 22nds with the October 22nds of the past.

In Psalm 42, the psalmist writes these words ...

3 "My tears have been my food
day and night,
while people say to me all day long,
“Where is your God?”
4 These things I remember
as I pour out my soul:
how I used to go to the house of God
under the protection of the Mighty One
with shouts of joy and praise
among the festive throng."

Even as he weeps, he remembers how he used to shout with joy and praise while he participated in festivities.

Just like our family used to get so much joy from celebrating our girl on October 22nd, a day that is now marked by tears.

But, thankfully, he doesn't stop there.  In the very next verse he says this ...

5 "Why, my soul, are you downcast?
Why so disturbed within me?
Put your hope in God,
for I will yet praise him,
my Savior and my God."

Did you catch that?  The psalmist talks to himself!  Well, actually, he talks to his soul ... and he reminds it that there's really no reason to be downcast and disturbed.  He reminds it (and us) that we need to put our hope in God, and that even though our heart and soul are hurting, we can still praise Him.  Truly a sacrifice of praise.

My parents always told me it wasn't nice to "talk back" when I was growing up, and we taught our girls the same thing.  But you know what?  This week, when my soul tells me I should be downcast and disturbed because I'll be visiting Hannah's grave on her birthday, instead of celebrating with her in person, I'm going to talk back to it.  I'm going to tell it where my hope is, and that that I'm going to choose to praise my God.  Because He is my Savior, and He was Hannah's Savior, I will spend eternity celebrating October 22nds with her!  Truly a reason to rejoice, even on those days when my soul hurts. 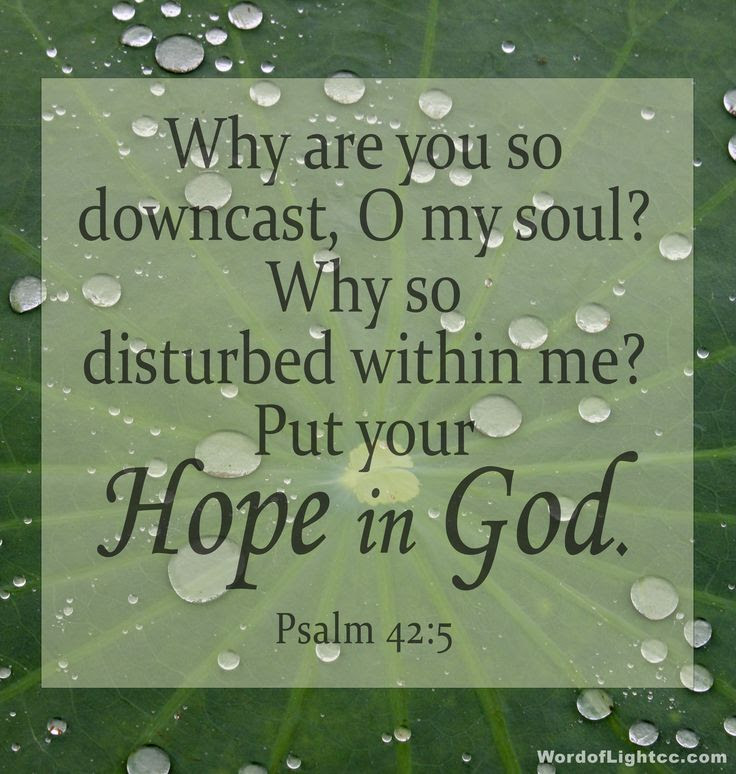 Written by The Sullivan Four at 12:15 PM 1 comments 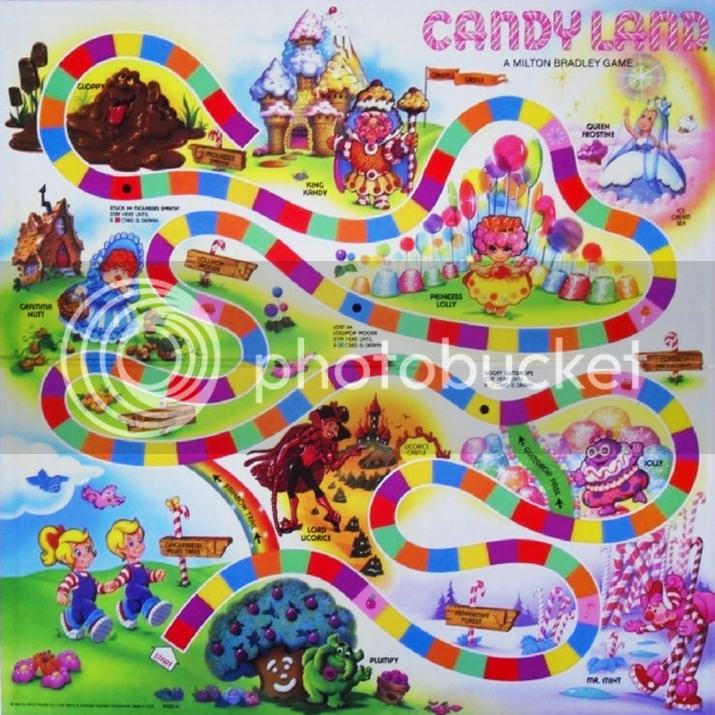 Anybody remember the game Candy Land?  I absolutely loved playing Candy Land when I was a kid, and my girls loved it, too.

It was our favorite game to play together, and was always our go-to game when one of them had to stay home from school because they were sick.

I can still remember how excited Hannah would get when she got to take one of the shortcuts.  She'd say, "Look Mommy!  I get to go up the 'Wainbow Twail!'"  For the uninitiated, she was referring to the "Rainbow Trail" ... a shortcut that allowed you to skip a large portion of the long, winding trail.  There was another shortcut called the Gumdrop Pass, which took you through the Gumdrop Mountains, but that one wasn't nearly as exciting because you didn't get to skip as much.

The game was also a lot of fun (or not!) because of the unpredictability.  Your little gingerbread person could just be racing along, making great progress, almost to the Candy Castle, and BAM, you'd draw a Plumpy card and you're almost back to the beginning.  Or, you could be dragging along, feeling like you're getting nowhere, and WOO HOO, you'd pull a Queen Frostine card, and suddenly you're back in the running.

For some reason, I was thinking about Candy Land the other day (I know, random, right?) and it struck me how much this simple children's game is like the journey of the grieving parent.

I guess because we hear so much about the "stages of grief", we sometimes get the idea that the road of grief is a straight shot through all those stages, and that everybody travels the same route.  In truth, it's much more like the path on a Candy Land board, constantly meandering back and forth and folding in on itself.  Our path to the Candy Castle (healing) is a winding one, and it's different for every person.

And as much as we'd like to take the Rainbow Trail or even the Mountain Pass to skip some of the really tough parts, we can't.  We have to take every step through the Gumdrop Mountains, the Lollipop Woods, and the Molasses Swamp.

Sometimes we'll be moving along the trail and think we're doing okay ... even pretty well ... when Wham! Something hits us out of the blue, and knocks us back the way we came, maybe even almost all the way back to the beginning.  And sometimes we feel like we're not making any progress at all, when God gives us a special boost of encouragement and suddenly we're at the Ice Cream Sea.

One thing I do know about Candy Land ... the only way to finish the game is to keep on playing.  If we grow weary of the setbacks, and we lay our little gingerbread person down beside the trail, we'll never make it to the Candy Castle.  Or if we conclude that the game is just not fair and throw it up in the air, scattering playing pieces and cards everywhere, healing becomes even more elusive.

And the only way we can keep playing is to hold the hand of Jesus as we walk.  Maybe that's why the people who made the Candy Land game made those little playing pieces with their hands out to the sides like that ... to remind us to hold His hand on the journey.

Or maybe I'm the only one who sees all these crazy parallels between Candy Land and the grief journey.  That is certainly possible.  :) Written by The Sullivan Four at 5:11 PM 1 comments