This post is #42 in a year-long series ... Through this series of posts I plan to share our family's experiences during our 17-year-old daughter's year-long battle with brain cancer, which began in February of 2008. My desire is to process through the events of that year from the perspective that a decade of time has brought ... for myself, really. But if you'd like to follow along, you're welcome to join me. 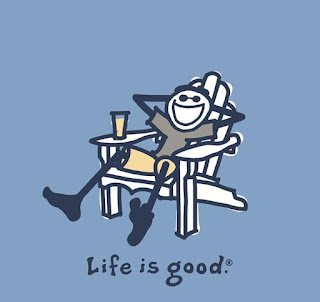 Have you ever seen those T-shirts that say "Life is good"? They always have some kind of relaxation-inducing picture to illustrate that concept ... like a lawn chair and a glass of lemonade, or a pair of flip-flops and a beach umbrella or something. They're nice T-shirts ... they come in all different colors in sort of a weathered-looking fabric. Seems like I usually see them in sporting-good stores. I always look at them because I like them, but I've never bought one ... partly because I think they're a little pricey for T-shirts, but mostly because I'm not completely sold on the "Life is Good" sentiment.

Oh, there was a time when I wouldn't have thought twice about that slogan ... life was good, and always had been for me. My eyes had not yet been opened to the world of childhood cancer. Sure, I knew it existed. I had seen those St. Jude fundraisers on TV ... you know the ones. Of course, I always changed the channel really fast so I didn't have to look at those steroid-swollen children with no hair or eyebrows ... I felt bad for those kids, but I didn't know any of them. They weren't my kids, or my neighbor's kids, or my friend's kids, so it was easy to change the channel and blithely go on my way.

When we were in Gulf Shores, Alabama, a few years ago we went in one of those tourist trap stores. This one is called Souvenir City, and the door is shaped like an enormous shark's mouth. If you've ever been there, you've seen it ... You can't miss it!

As I wandered through the T-shirt section, I spotted a group of shirts that looked just like the "Life is Good" shirts from a distance. I walked up to look at them, and found that these were a little different. These shirts actually said, "Life is Crap" and had pictures like a tree falling on someone's car, or a guy hitting his thumb with a hammer. Some were kind of funny ... like one that had a picture of a men's restroom and a ladies' restroom. The ladies' room had a line of about five women waiting to use it, and of course the men's room had no line. Anyway, these shirts gave me a chuckle, and then got me thinking.

Life isn't always good ... but God is. Sometimes life is crap ... but God is always good. In his wisdom and sovereignty, He allowed our family to see and experience some of the more crappy parts of life. He took us beyond seeing young strangers with cancer on TV, to learning the names and faces and families and stories of many cancer battlers right here in Arkansas and beyond. It is such a privilege to be able to lift these families up in prayer, and to keep up with their journeys through the storms.

In John 9:1-3, the disciples questioned Jesus about why a man was born blind, trying to determine whether it was caused by sinfulness. Jesus replied, "Neither this man nor his parents sinned," and then He goes on to explain the purpose of the man's disability: "This happened so that the work of God might be displayed in his life."  Did you catch the "so that"?  The "so that" means that the man's blindness was not due to bad luck, haphazardness, or neglect. God had a specific, divine purpose for the man's disability. And today, some 2,000 years later, I believe that is still true. In His sovereignty, I believe that God allows the difficult times in our lives. But He will always, if we choose to allow Him, display His goodness through them.

So which shirt had the right message?  For me, it's a combination of the two. Life sometimes is crap ... but God is always good!
Written by The Sullivan Four at 3:22 PM