Thoughtful Thursday ... What Am I Missing? 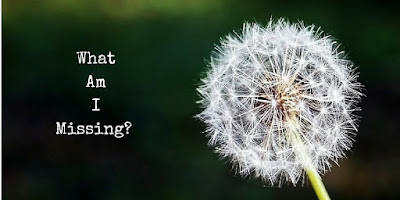 When my daughter Hannah was little, she had a friend named Nicole.  Nicole was a curly-headed girl with round-framed glasses, and the two of them were in AWANA Cubbies together.  They had a blast learning Bible verses, eating cookies and drinking red Kool-Aid, and hopping and jumping around the room as they belted out the Cubbies theme song together.

Nicole is all grown up now, and is serving the Lord as a youth minister in California.  She still has the same curly hair and (not as round) glasses, and it's been a joy to watch her grow up from afar via Facebook.

Even as I write that, I must confess that there's a tug in my heart ... How I wish I could have seen Hannah grow up like Nicole has!  What would she be like as an almost 24-year-old woman?  There's always that little (sometimes not-so-little) twist of pain as I see Hannah's contemporaries serving the Lord, getting married, having babies.  But at the same time, I am thankful when I see her friends doing well.

Nicole lost her dad a couple of years ago, and she recently shared on Facebook about how she was struggling with the difficult memories associated with his Heaven-going.  But then she went on to say that she had heard a speaker online (who I later discovered was Beth Moore) sharing the story of an aging father who had lost two children many years previously.  The father was speaking at a family dinner to his remaining family members, saying, "I don't want to miss you because I miss them."  This was very encouraging to Nicole as she has really been missing her dad recently.  She said, "I never ever want to miss an opportunity or another human being because of the loss I have experienced."

Her comments really made me stop and think.

What might I be missing because I miss Hannah?  There's so much!

If the situation were reversed, and I were the one who had died seven years ago instead of her, I would certainly not want her to miss her life missing me.  I would want her to live her life to the fullest, squeezing every moment of joy out of it she could.

And I don't think Hannah would want any less for me.  And I know God doesn't ... Jesus said that he came that we "may have life and have it abundantly" (John 10:10).

So yes, I will miss Hannah ... but by God's grace and through His strength, I will choose not to miss this life He has given me.

Written by The Sullivan Four at 5:30 AM 6 comments