This post is #37 in a year-long series ... Through this series of posts I plan to share our family's experiences during our 17-year-old daughter's year-long battle with brain cancer, which began in February of 2008. My desire is to process through the events of that year from the perspective that a decade of time has brought ... for myself, really. But if you'd like to follow along, you're welcome to join me. 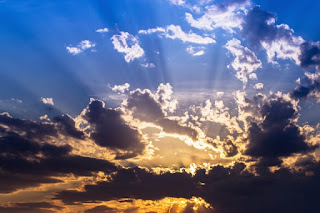 I am an avid reader of World magazine, which is basically like Time or Newsweek, but written with a Christian worldview. It is primarily a newsmagazine, but contains some op-ed type pieces as well. About a year after Hannah went to Heaven, I read an article titled "Age of Miracles" by Janie B. Cheaney.  Ms. Cheaney began the article by stating that "though skeptics characterize the Bible as a collection of fairy tales, miraculous events are not that common" and "He can prove that He's the one true God as easily as a man swats a mosquito. Why doesn't He?" She states that the answer to that question may have more to do with who we are than who He is. She points out that the reports of the parting of the Red Sea frightened the residents of Jericho, but only Rahab and her family changed their allegiance because of it. Even when fire fell from heaven and devoured Elijah's altar, the Israelites' zeal didn't last (I Kings 18-19).

Cheaney states that the Israelites shouting, "'The Lord, He is God! The Lord, He is God!' had as much staying power as shouting 'USA! USA!' at victorious Olympic events: a feel-good moment that may glow for a week or a month, but won't change a life." She points out that the manner of Christ's conception was known to only two people; His birth to perhaps a dozen; His healing miracles were often performed one-on-one, and often a warning was given to keep it quiet. Even for large miracles like the feeding of the 5,000, probably only a small fraction of those present knew for sure what was happening. The author's overall conclusion was that while the miracles recorded in the Bible meant a great deal to those directly involved, they generally didn't have life-changing effects on many others.

The day after I read that article, I went to Sunday School, and would you believe ... our Sunday School teacher talked about the fact that in general, miracles don't draw people toward salvation.

It seems like so many times since Hannah's death, I've heard about people who have been miraculously healed of cancer. A tumor has been found, an ominous prognosis has been given, and when the person returns to the doctor for treatment, the cancer is inexplicably gone. And while I'm truly happy for those people and rejoice with them that they don't have to go through radiation and chemotherapy, as I walk away I can't help feeling a little dig of "Why didn't that happen for Hannah?"

We and so many others were praying for that kind of healing for her, but it did not happen. During Hannah's illness, many well-meaning people made comments like, "What a testimony she will have someday when she is healed." Or, "Maybe God will do a miracle and just think how much glory He will receive through Hannah's life."

Over the years I've wondered ... what if Hannah had been miraculously healed, like we so earnestly desired? Would her life have had the same far-reaching effects it has had?  Would lives have been changed and people saved?  Or would people have just gotten a warm and fuzzy feeling about God, which would soon be forgotten?  Perhaps her healing would have been dismissed as a misdiagnosis, or a fluke of nature.

I don't know the answer to these questions, and won't know the answers this side of Heaven. But it's interesting to think about ... and I know that in God's sovereignty, His purpose has been fulfilled for Hannah's life. And while we didn't get the miraculous healing we prayed for here on earth, we know she is eternally healed in Heaven. And when it comes down to it, what could be more miraculous than that?
Written by The Sullivan Four at 3:12 PM