This post is #16 in a year-long series ... Through this series of posts I plan to share our family's experiences during our 17-year-old daughter's year-long battle with brain cancer, which began in February of 2008. My desire is to process through the events of that year from the perspective that a decade of time has brought ... for myself, really. But if you'd like to follow along, you're welcome to join me. 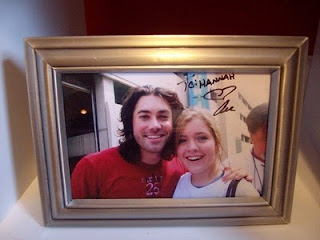 Ten years ago today was just another day of recovery in the hospital ... Not a lot to share about that, so I thought I'd take the opportunity to give you another little peek into Hannah's personality.

The beginning of American Idol was a highly anticipated event in our home every January.  You cannot imagine what a big deal it was. Hannah became a fan of the show in its second season...during the big face-off between Ruben Studdard and Clay Aiken. She liked Ruben that year, and was thrilled when he won. The next year, she supported Diana DeGarmo, spending two hours voting for her after each show. Carrie Underwood was her favorite the next year, followed by Taylor Hicks, Jordin Sparks, and David Cook. She was pretty good at picking the winners, and it was probably her relentless voting that put most of them over the top! We would arrange our whole schedule around Tuesday and Wednesday evenings ... and life was greatly simplified with the advent of the DVR!  We attended four American Idol Top Ten concerts together, and she was able to meet and get autographs from several of her favorites.  The picture above is Hannah with Ace Young from Season Five, and I love the look of joy mixed with disbelief on her face.  I have some wonderful memories associated with our girls and American Idol.

I remember watching the show together in the hospital, just a few days after her brain surgery. It was hard for her to watch, because the surgery had left her unable to look up with her eyes without moving her head, and of course, the TV was mounted up high on the wall.  Once we were in a private room, we were able to turn her bed-on-wheels into a position where she could see it more easily.  We watched that season together with particular interest in David Cook, whose brother was battling a brain tumor.  I remember cringing as they talked about how seriously ill he was, wondering what was going through her mind as she listened, but she seemed unaffected.  We watched the "David vs. David" finale that year, and Hannah cheered as David Cook was declared the winner.

It's ironic to me that American Idol is about to be reprised as we are marking the tenth year since Hannah's diagnosis. Will we watch this latest incarnation?  Ehhhh ... maybe.  It's certainly not the same watching it without Hannah. And I'm a different person than I was when I first started watching it with her.  Older, more sober, hopefully wiser ...but definitely better because of what the Lord has taught me through my own daughter.  He continues to teach me, and I pray that I will continue to learn.
Written by The Sullivan Four at 6:11 PM