Hannah had her weekly bloodwork done a day late this week, because we spent the day yesterday celebrating the life and homegoing of Brad’s grandmother. Frankie Mae Stahl Owens was a precious, godly lady whose life was an example to the whole family and to all those around her. She will be greatly missed, but we are all rejoicing that she is now in Heaven, where she most wanted to be! 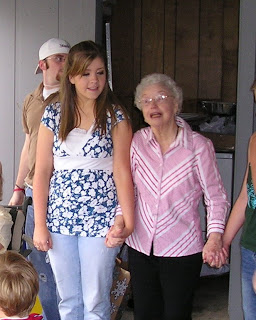 Hannah’s counts have all risen somewhat this week, including her platelets, which are now at 87,000. That means she will start her next five-day round of her chemo drug tonight. The doctor has decreased her milligrams from 340 to 300, in hopes that it won’t take her platelets quite so long to recover from this dose. They have also prescribed a different anti-nausea drug, which we are hoping will be more effective in keeping her nausea under control. Starting a new round of this treatment is kind of bittersweet…we hate for Hannah to have to go through it when she’s been feeling so good lately, but at the same time, it is good to get back on track with her treatments again, because it will just bring her closer to getting finished! She will have eight more rounds to go after this one is completed.

Next Monday (July 21st), we will go to Arkansas Children’s Hospital for her bloodwork, her antibiotic breathing treatment, and an MRI. This will be a very full day, and Hannah may still be feeling a little sickly from having just finished her chemo medication a couple of days before. Then on Tuesday night, we will be meeting with a volunteer from the Make-A-Wish foundation, which Hannah is really looking forward to!

Please be in prayer that this round of chemo will cause less nausea than the last one, and that our appointment on Monday will go well, with a good MRI report. Your prayers have meant so much to us over the last four months, and we continually thank God for all of you!

God is good, all the time!
Jill
Written by The Sullivan Four at 8:53 PM

Email ThisBlogThis!Share to TwitterShare to FacebookShare to Pinterest
Labels: Hannah's Story in Emails