Ten Things I'd Like People to Remember about Hannah

This post is #59 in a year-long series ... Through this series of posts I plan to share our family's experiences during our 17-year-old daughter's year-long battle with brain cancer, which began in February of 2008. My desire is to process through the events of that year from the perspective that a decade of time has brought ... for myself, really. But if you'd like to follow along, you're welcome to join me. 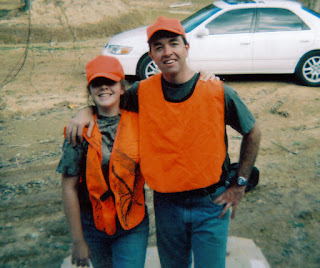 Early on after Hannah went to Heaven, I often heard other parents who had lost children talk about how much they worried about people forgetting about their children. And I remember thinking to myself that I would never be that way ... I certainly didn't want people to forget about Hannah, but for me personally, that was not a huge concern.  I knew I wouldn't forget her, and at the time that's all that really mattered to me.

Well, now it's over nine years later, and I must admit that those kinds of thoughts do creep up on me from time to time. It's become a little more important to me that people remember not just that she lived, but the things that made her Hannah.

1. She loved her family -- Whether it was a noisy extended family gathering or a quiet evening at home with just the four of us, she would rather spend time with her family than do just about anything else. She loved spending time with her cousins, who always made her laugh.

2. She loved school -- She was all about learning, and took great pride in excelling academically.

3. She was a Hog fan -- The Arkansas Razorbacks, that is. She had no athletic ability of her own (she inherited my limited athletic ability rather than her dad's!), but she really enjoyed a good Razorback football game.

4. She was a "girly girl" -- She loved flashy earrings, colorful tops, and pretty shoes. You would never catch her going to school in a t-shirt and tennis shoes.

5. But, she was also a "tomboy" -- She loved dressing down in camo and boots, riding 4-wheelers, and deer hunting. Maybe it was just because she liked hanging out with her dad.

6. She looked just like her dad, but she acted just like me -- She had my good character traits as well as the bad. It's almost scary how similar our personalities were, and I would love to see what our relationship might be like now that she would be twenty-six years old.

7. She was a deep thinker -- I'll never forget the question she asked me when she was 5 or 6 years old. Having been told her whole life that she looked just like her dad, she asked, "How can a kid look like their dad when their mom has them?" I think my reply was something along the lines of, "Isn't it amazing how God does that?" From that point on, she kept me on my toes!

8. She had a strong faith in God -- In fact, a few months prior to her cancer diagnosis, she prayed that God would send a storm into her life to help her grow closer to Him, and so that others could see Him through her storm. Not long after that, she posted on her Facebook page, "This world has nothing for me...I will live for Him." When her diagnosis came, she accepted it as her storm, and her faith never wavered. She never asked, "Why me?" and she never complained about her situation.

9. But, she was not perfect -- Often, when someone dies young, there is a tendency to put them on a pedestal, to almost venerate them as some sort of saint. This seemed to be especially true of Hannah, because many people knew about her prayer for a storm and watched her valiantly battle cancer for a year. But she was not perfect (her sister can attest to that!) ... she was a sinner in need of a Savior.

10. She lived -- Perhaps most of all, when people think of Hannah, I don't want them to think of her as that girl who died of cancer ... I want them to remember the girl who lived for 17 1/2 years. And I want them to know that she still lives today ... in fact, she's more alive than ever before!
Written by The Sullivan Four at 2:52 PM