This post is #52 in a year-long series ... Through this series of posts I plan to share our family's experiences during our 17-year-old daughter's year-long battle with brain cancer, which began in February of 2008. My desire is to process through the events of that year from the perspective that a decade of time has brought ... for myself, really. But if you'd like to follow along, you're welcome to join me. 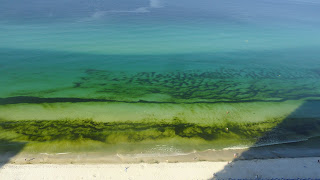 Two years after Hannah went to Heaven, our family took a trip to Panama City Beach for a week.  We really enjoyed the opportunity to get away ... the condo where we stayed was lovely, the weather was perfect, and the sunsets were spectacular.

The only down side of the week was the "June Grass" ... thick, slimy seaweed that, according to the locals, usually only shows up in June. That year, it made its appearance in the middle of July.

Hannah would have hated that seaweed. It really didn't bother us too much .... we were determined to enjoy our time at the beach, and went into the water just as if it wasn't there. The other thing Hannah wouldn't have liked were all the schools of little fish we saw (in the few clear spots between the seaweed). She had a funny fear of fish swimming around her like that ... and I'm really not sure she would even have gone into the water with all that seaweed, especially since she couldn't see what was around her feet and legs.

Hannah actually had a lot of little fears ... before she was diagnosed with cancer, that is. After her diagnosis, it seemed as though she was never afraid of anything again. She faced brain surgery, radiation, chemotherapy, countless MRIs, and more ... all without any apparent fear. One time, when they were lying in bed together at night, Bethany asked Hannah if she was scared that she might die from her cancer. "No," she replied, with disdain in her voice, as if she couldn't believe Bethany even asked her that question.

How did she do that? How did she go from being a world-class worrier to a fearless warrior? The only answer is her faith in God. Her belief that her storm was fully under His control removed all
fear.