This post is #54 in a year-long series ... Through this series of posts I plan to share our family's experiences during our 17-year-old daughter's year-long battle with brain cancer, which began in February of 2008. My desire is to process through the events of that year from the perspective that a decade of time has brought ... for myself, really. But if you'd like to follow along, you're welcome to join me. 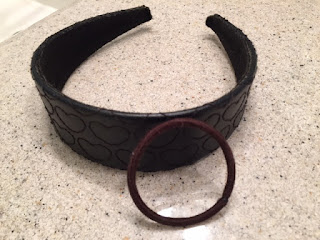 By this point in her treatment protocol, Hannah was beginning to lose some hair.  As a sixteen year old girl with thick curly hair, this was naturally a bit alarming to her.  It bothered her the most when she washed her hair, because she could feel it coming out in her hands.  It was so troubling to her, she asked me to start washing her hair for her ... and so that's what we did.  She would put on her swimming suit (always a modest girl!) and turn on the water.  Then I would lean into the shower and wash her hair for her.  And it was alarming how much hair would come out each time ... I kept a trash can close by and just dropped the wads of hair into it, being careful not to let her see.

After her shower each evening, we had another little ritual.  As her hair was naturally drying, she would watch TV, and I would gently run my fingers through her hair, pulling out the loose strands.  She never wanted to know how much hair came out, so I didn't show her.

Our oncologist had assured us that the chemotherapy drug she was taking would not cause her to lose her hair.  And the radiation oncologist had told us she would possibly lose some hair, just in the areas where the radiation beams were going in.  But this looked like a lot more than just "some hair" to me!

So ten years ago today, Hannah and I took some time off school and work and attended a special program at our local cancer center called "Look Good, Feel Better."  It was a program designed for women undergoing chemotherapy and radiation.  I can't even express what a surreal feeling it was to walk into that room full of mature women with my 16-year-old daughter to talk about cancer, hair loss and wigs.  The speaker that day had a lot of experience with women undergoing radiation treatments, and she carefully studied Hannah’s scalp and told us that she didn’t feel she would lose much more hair than she already had.  What a reassurance that was!

When we went for her radiation appointment that afternoon, the technician also told us that she probably wouldn’t lose much more hair.  The technician showed us how the thinning spots all corresponded with exactly where the beams of radiation were entering her skull ... and each of those spots was perfectly square-shaped!

We were thankful that Hannah's hair loss did gradually slow down and then stop, although the thin areas remained.  A ponytail with a wide black headband became standard fashion accessories for her, and she managed to cover up those square-shaped areas pretty well.

In my email that evening, I included this update on Bethany ...

Just a quick update tonight … we finally heard from the nurse at Arkansas Children’s Hospital, where Bethany had her blood work done last week. Everything she was tested for turned out to be negative … which is good news! They had told us that if that happened, it was probably an indication that her illness was viral in nature and would just eventually run its course. She has also really been feeling better this week, which of course, makes us feel better, too. We are thankful to know that she does not seem to have anything serious.

Jill and Brad
Written by The Sullivan Four at 6:00 PM

We have “Look Good Feel Better” here in N. Ireland too. Leah attended a makeup workshop with them about 4 weeks before she died and it really cheered her up. She lost all her hair at the start of August 2013 and 5 months later there was still no signs of regrowth which she was quite frustrated about. Her finger nails all fell off too. The doctors were a bit puzzled but concluded that it was due to a combination of the fact that she received a very high dose of chemotherapy and had also been very ill.

I'm glad Leah was encouraged through the Look Good Feel Better program. I know it really helped Hannah a lot! Our girls went through some very hard things, didn't they?