Monday Mourning -- Back To School

I've just got to share this picture of Bethany heading off to her "second-to-last" first day of school. 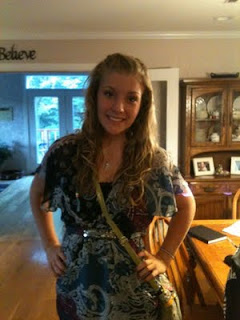 She just looked so pretty this morning as she was preparing to start her junior year of high school.  And you moms out there...you know how you look forward all day to picking up your kid(s) from school at the end of the first day so you can hear all about it?  Well, it hit me about mid-morning that I won't be picking her up today...she'll be driving herself home.  Wow...This girl is really growing up!

I've also thought a lot today about how Hannah's "second-to-last" first day of school became her "last" first day of school.  We knew as she was starting her junior year that she was in the fight of her life, but at that time her scans were all clear and she was technically cancer free.  It wasn't until late September that the battle began anew.  And I've thought about how this is the third "back to school" we've endured without her here...beginning her sophomore year of college.  On one hand that doesn't seem possible...that there's no way that much time could have passed, but then on the other hand it feels like it's been f-o-r-e-v-e-r since I've seen her beautiful smile.

She would have been so excited about heading back to school this fall.  Much more excited than her younger sister was this morning...Ahem.  She absolutely lived for school.  And she would have loved college.

One of the hardest things for me at this time of year is to read all the other moms' Facebook posts about their kids starting kindergarten, starting junior high, starting their senior year, leaving for college, etc.  As I read about them crying as they say good-bye when dropping off their kids at college, I find myself becoming resentful.  I hate to admit it, but I start grumbling to myself, "What are you crying about?  At least your kid is getting to go to college.  And you can text and call each other anytime you want to, and they're going to come home for weekends and Christmas!  What in the world are you crying about?"  And I think, "It's just not fair that this had to happen to our family, Lord!  What about them?"

It's ugly, I know, but I'm just being honest.  Satan just works on me that way.  But here's the thing...That kind of comparison is not God's desire for me.

Take a look at this passage from John 21.  In verse 18, Jesus is speaking to Peter:  "Truly, truly I say to you, when you were young, you used to dress yourself and walk wherever you wanted, but when you are old, you will stretch out your hands, and another will dress you and carry you where you do not want to go."  (This he said to show by what kind of death he was to glorify God.)  And after saying this, he said to him, "Follow me."  Peter turned and saw the disciple whom Jesus loved following them, the one who had been reclining at table close to him and had said, "Lord, who is it that is going to betray you?" [He's referring to John here.]  When Peter saw him, he said to Jesus, "Lord, what about this man?"  Jesus said to him, "If it is my will that he remain until I come, what is that to you?  You follow me."

Did you catch that?  Jesus gave Peter a glimpse of the type of death he would die, and Peter immediately pointed to John and said, "Well, what about him?"  And Jesus basically replied, "None of your business.  You just follow me."

So, when I find myself grumbling and comparing and feeling sorry for myself and wondering, "What about them?", Jesus gently reminds me that He is in control, He hasn't forgotten our little family, and that His plans for me (and all those other moms out there) are perfect.  Rather than resenting, I should be rejoicing that others haven't had to endure what we have.  And I should remember that many others have endured far, far worse than what we have.

So, with His help, I choose to rejoice in, and not resent, the calling He has put on my life to trust Him and His plan for me.  It's a daily battle, and not an easy one, but He is faithful, and for that I am thankful.
Written by The Sullivan Four at 3:13 PM

Keeping you always in my prayers.
Jean

I couldn't have said it better, mysself Jill. I know exactly what you mean about this time of year and all the posts. Madison started High School today....a FRESHMAN!!! Matt was a Sophomore when he died...He would be starting his first year of college this month! Thank you for reminding me about the "big" picture. Love you!!!

Jill,
I have a shortcut to your blog on my desktop at work. I can go long periods without ever clicking on it but each and everytime I do, I learn and I am blessed. You cause me to examine and look at something from a different angle. Just ran into a friend in the hospital hallway this morning. Her son's fiance was killed in an auto accident this summer. Several of the girls in my small group were close friends with this girl. I just realized I need to share my "shortcut" with all of them. You are a blessing! Molly

We just had dinner with our friends who have also lost a baby. It was a wonderful dinner and sharing experience. I directed her to log onto your blog and just kick back and read it. I am so happy that you and your family have been in our lives over the past 3 years. I am so blessed that we have made our friendship much closer this past year and looking forward to sharing many more memories! Just thought I would share that with you!! I still use God is good all the time!!!

You are a blessing to so many people, I hope you realize that. I love reading your posts, they are always eye openers to me. Your words always touch my heart and help me in my everyday life.

Thank you and love you - Kelley

All that you said about being "resentful" towards others about the first day of school hits home with me. Aug 15, the first day of school, was my son's first day @ St. Jude's. It was also the day we were told he probably would not make it thru the night. All day I kept thinking to myself that Joel was supposed to have started kindegarten today not be here. I questioned God more that day than I had all thru out Joel's battle.