This post is #120 in a year-long series ... Through this series of posts I plan to share our family's experiences during our 17-year-old daughter's year-long battle with brain cancer, which began in February of 2008. My desire is to process through the events of that year from the perspective that a decade of time has brought ... for myself, really. But if you'd like to follow along, you're welcome to join me. 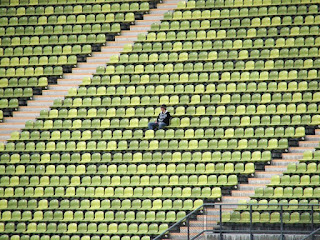 Hannah's facebook status ten years ago today:  "Hannah is frusturated that my immune system is so low that I can't go anywhere besides the hospital ... but only 2 radiations to go so it should get better soon!"

I love how Hannah acknowledges her "frusturation" in this status, yet comes back to the positive side ... reminding her readers that things should get better soon.  She kept that attitude throughout her year-long cancer battle, even as the extensive radiation treatments were beginning to take a greater and greater physical toll on her.

My email from a decade ago today ...

We took Hannah to Children's Hospital for routine blood work and to meet with her oncologist today. Her blood work showed that her platelets are too low again, so we will be returning tomorrow for another platelet transfusion. Also, her white blood cell count has dropped low enough for her to have to be isolated at home. This is not really too much of a problem since she is not in school right now, but it does mean that she can no longer have visitors or go out to eat, to church, etc. This isolation period should not last too long, though, since she only has two more radiation treatments to go. Once the radiation is complete, her counts should begin to recover fairly quickly.

Our oncologist told us today that we will be having an MRI soon (we should find out the date tomorrow) to determine the effectiveness of the radiation treatments. After that, he wants to start the chemotherapy treatments as soon as her blood counts are high enough to allow it. We had originally understood that Hannah would have a 4-week break from treatments after radiation, but he told us today that he hopes to start chemo in one to two weeks. We should have a little bit better idea of the actual schedule tomorrow.

Hannah continues to feel fairly well, although she has a constant sore throat and a dry cough from the radiation. Fatigue is also an issue, both due to the radiation, and due to difficulty sleeping at night from the sore throat and cough. However, she remains positive and upbeat and her faith is strong! It's nice to know that after she finishes radiation on Wednesday, she can look forward to gradually feeling better. We are all really learning the concept of taking one day at a time!

Your continuous encouragement and support has really carried us through...thank you for keeping us reminded that God is good, all the time!

Jill and Brad
Written by The Sullivan Four at 2:43 PM