This post is #112 in a year-long series ... Through this series of posts I plan to share our family's experiences during our 17-year-old daughter's year-long battle with brain cancer, which began in February of 2008. My desire is to process through the events of that year from the perspective that a decade of time has brought ... for myself, really. But if you'd like to follow along, you're welcome to join me. 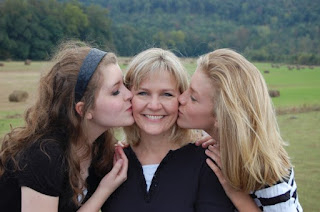 Things were continuing to go well with Hannah's tomotherapy radiation treatments ... other than a recurrence of low platelet issues.  We were used to that, though, so we were able to pretty much take that in stride.

We spent the weekend in Briggsville, Arkansas, which is the Sullivan family farm and gathering place.  While we were there, my sister-in-law pulled out her camera and we did a family photo shoot.  Hannah's hair was really starting to let loose -- if you look carefully you can see that in the photo above -- and we wanted to get some pictures of our family before it fell out completely.

Posing for those pictures that day was surreal, as we did so with the full awareness that unless God miraculously intervened, these could very well be the last family photos we would ever take.  Of course, we didn't want the girls to know that, so we posed as directed and smiled on cue.  One of these pictures is now the cover photo of this blog.  And oh, what a treasure these pictures are today!

Hannah's grave (actually her future resurrection site!)  is just about a half mile from where these photos were taken.

Today we went to Arkansas Children's Hospital for blood work and to see Hannah's oncologist, followed by her daily radiation treatment at CARTI. Her doctor was pleased with how well she is doing, and the fact that the side effects of the radiation have thus far been minimal, but he did tell us that her platelet count has dropped pretty low. So, tomorrow we will go for radiation at 8:30 a.m., followed by a transfusion of platelets at Children's Hospital. He also wants us to come back on Friday after radiation for another blood draw to check her platelet count again. Apparently, radiation to the spinal cord can really cause a drop in platelet production, and they want to keep on top of that.

Over the weekend, we had the opportunity to get together with several of Brad's family members, and my sister-in-law (who is a great photographer!) took several pictures of our family. I've attached a couple of them for you to see. In both of these pictures, Hannah is on the right, and Bethany is on the left in the striped sweater. Thank you, Maria!

We are so thankful that Hannah is feeling well overall, and that we have been blessed with such a great medical staff to oversee her care. We are also filled with gratitude for all of the friends, family, and strangers who have done so much for us...we can never thank you enough for the prayers, emails, cards, phone calls, gifts, meals, etc. We see these expressions of love as symbolic of what Jesus Christ has done for all of us...His salvation is the ultimate gift! 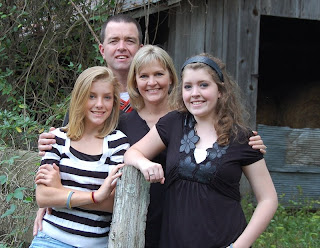 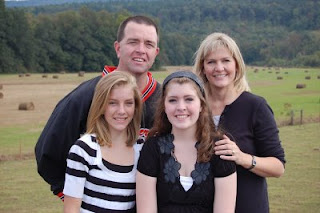 Written by The Sullivan Four at 2:39 PM

I love the photos - such precious memories ❤️