The Origin of While We're Waiting (Part 3)

This post is #194 in a series ... Through this series of posts I plan to share our family's experiences during and following our 17-year-old daughter's year-long battle with brain cancer, which began in February of 2008. My desire is to process through the events of that period from the perspective that a decade of time has brought ... for myself, really. But if you'd like to follow along, you're welcome to join me. 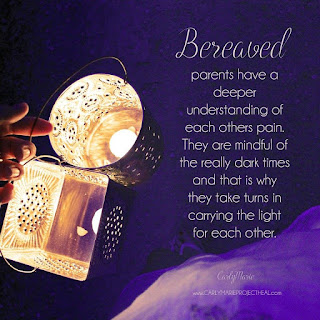 Even though I didn't really want to go, and this thing was waaaay outside my comfort zone, Brad and I signed up for the Respite Retreat scheduled for Labor Day Weekend in September of 2010.

Respite Retreat was an event hosted by David and Nancy Guthrie specifically for parents who had lost children.  At the retreat, we spent hours listening to bereaved parents pour out their hearts both in group meetings and with us privately over meals and during free time.  We did our own share of pouring, as well!  There were twelve couples there from ten different states and Canada, and our stories of loss were, for the most part, very different. But here are some things that, over the course of the weekend, we discovered we had in common:

-- The pain we share is deep, and it is very real. There were parents there whose son lived for only two heartbeats after birth, and parents whose daughter lived to be an adult with a child of her own. There were parents whose child had suffered months or years of illness, and parents whose child's life was gone in one earth-shattering moment. Two couples had lost two children. I still don't know if the conversation I overheard 17 years ago was completely accurate.  I do believe there are things that could be worse than death when it comes to your children, but the pain and grief I heard and felt that weekend was immense. It didn't matter how old our children were or how we lost them ... the pain was deep, and it was real.

-- Most of us who were there had come to terms with God's sovereignty in taking our children to Heaven sooner than we would have liked, but as one dad put it, "We reserve the right to protest." While we all agreed that our faith has gotten us through our experiences, nearly all of us had experienced some real spiritual struggles.

-- All of us had struggled with feeling "different" or "out of place" in the world. Our thoughts are different, our outlook is different, our conversation is different. One mom said, "Everyone around us is talking about kindergarten and we want to talk about calculus!"  I agreed with her.  Who has time for small talk and chit-chat, when there are issues of such great importance to discuss? I think that's one reason we enjoyed visiting with these other parents so much!  We spent all our time talking about issues and experiences we felt so passionately about.

-- All of us had struggled with getting back into "real life" after the death of our children. People usually don't know what to say to us, or if they should say anything at all. And we're no help ... sometimes we want them to talk to us and sometimes we don't! One couple said that they felt like they carried death with them everywhere they went, and it had deeply affected their relationships with others.  Oddly enough, the place we all agreed was the most difficult to go back to was church!  I think part of that is just the emotion inherent in attending a worship service, but I suspect some of it may be that we seem to feel it necessary to keep up a "front" in church so that others will think we are just as perfect inside as we appear to be on the outside.

-- We had all experienced some degree of memory loss or "brain fog" related to our child's death and the time that's passed since then. I had thought it was just me, or the fact that I was getting older, but I realized that was not the case. Maybe it's because our thoughts had become so consumed with "calculus" all the time. I was just glad to know that I wasn't the only one!

-- All of the moms felt like they had aged rapidly since the death of their child. All of us described the experience of looking in the mirror and wondering what had happened to us! And not just in appearance ... it seemed that that extra weight of grief has taken a toll on our bodies as well.

-- This may be surprising, but when one dad described their experience of losing their 3-month-old baby as 100% terrible and 100% wonderful at the same time, we all murmured in agreement. We all agreed that as awful as losing our children has been, so much good has come from our experiences as well and we could be thankful for that.

-- All of us had a strong desire that our children not be forgotten. Every one of us, in different ways, had sought ways to memorialize our children. I had never thought this would be a big deal for us ... we truly believe Hannah's storm was more about God than it ever was about Hannah ... but as time went by, I did find myself wanting to make sure that Hannah's life was not forgotten.

-- Finally, we all agreed that we could never survive these experiences without our faith in God. I often heard people at that retreat wondering aloud how people got through things like this without Him. I had said that many, many times myself. And as difficult emotionally as the retreat was, we all left there uplifted, because we all knew we would be seeing our children again. Best of all, we all left knowing that the time we've spent without them here will be redeemed in Heaven someday ... every minute will be made up for. And that was a cause to rejoice.

This retreat was an incredibly valuable and healing experience for Brad and I.  Before the retreat was even over, we began talking about how wonderful it would be to bring this bereaved parent retreat concept back home to Arkansas.  We felt strongly impressed by God that this was something He may be calling us to do.  We had no idea what the first step might be, but we were prepared to take it.

Excellent! God is the only way through this!