"The Dead in Christ Shall Rise"

This post is #191 in a series ... Through this series of posts I plan to share our family's experiences during and following our 17-year-old daughter's year-long battle with brain cancer, which began in February of 2008. My desire is to process through the events of that period from the perspective that a decade of time has brought ... for myself, really. But if you'd like to follow along, you're welcome to join me. 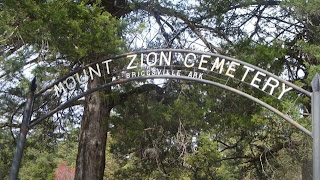 There never really was any question where Hannah's body would be buried.  There's a beautiful cemetery in Briggsville, Arkansas, where the Sullivan family farm is located.   Hannah spent many happy days at the farm ... hunting, riding 4-wheelers, and just hanging out with her cousins. Occasionally, we would stop at that cemetery and visit the graves of her great grandparents and other relatives. She always loved to walk around and read all the different headstones. It's a beautiful country cemetery, on a hillside with lots of trees and a gorgeous view. We knew that was the right place. 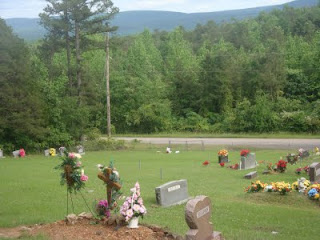 We chose to have a private family burial service the day after her celebration service.  The cemetery is nearly a two-hour drive from our town, and we didn't want everyone to feel they had to travel all the way there after the funeral.  We also knew that Hannah would not want a solemn caravan of vehicles with their lights on trailing after a hearse.  So we all just hopped in our own vehicles and met the funeral home folks at the cemetery that morning.

Unfortunately, several members of our extended family, including one set of Hannah's grandparents, had been struck down by a stomach bug overnight and were unable to attend.  We all hated that they couldn't be there, but it was too late to reschedule.

We sat under the little funeral tent beside the casket, a bit huddled together for warmth.  The sun was shining, and I was thankful for that ... but it was quite chilly.  It was still so hard to believe that we were the people sitting in those chairs.  How could this be our family?

The service was led by two of Hannah's uncles ... my brother Steve and Brad's brother Mark.  I remember my brother referring to David's words in 2 Samuel 12:23 as he mourned his son, "I will go to him, but he will not return to me," and feeling the pain of that truth deep in my heart.  As we concluded, our sister-in-law's sister Felicia led the group in singing, "It is Well With My Soul."  And despite the pain and sorrow, deep down it was well with my soul.

The cemetery is on a fairly steep hillside, and Hannah's grave is nearly at the top of the hill. In fact, it's a bit of a hike to get up there.  One thing that sticks out in my mind from that day is watching the pallbearers carry her casket up that hill. It bothered me that the casket was not level as they climbed, and I worried that all the things in there ... her stuffed dog, the letters her friends had put in there, the cross necklace that Mrs. Pat had put in there ... were sliding down to her feet. Hannah always liked everything "just so" and I was irrationally bothered by the thought of things shifting around. Such a strange thing to worry about on that day, but grieving minds are not always rational.

To this day, even ten years later, I have a very strained relationship with Hannah's grave. I don't normally like to spend time there. There's something about seeing your child's name in granite that brings you back to cold, hard reality. And although I know beyond the shadow of a doubt that Hannah herself is not there, and that it is just her earthly shell there below the ground, it is extraordinarily difficult for me to be that close to her body and not be able to be with her. Her body was just a vessel ... I know that ... but I loved that vessel. I cared for that physical body, when she was a newborn and unable to do anything for herself, and then again, as the cancer stole her ability to care for herself.

Maybe one day I'll make peace with her grave ... and then again, maybe not.  It's not permanent anyway.  One of these days the dead in Christ shall rise, and we will be caught up together in the clouds to meet the Lord in the air (1 Thessalonians 4:16-17) and that grave will be made obsolete.

Oh, how I look forward to that day! 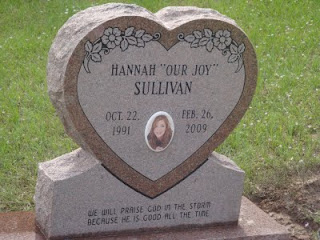 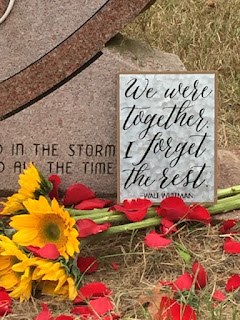 Written by The Sullivan Four at 8:22 PM