The Origin of While We're Waiting (Part 2)

This post is #193 in a series ... Through this series of posts I plan to share our family's experiences during and following our 17-year-old daughter's year-long battle with brain cancer, which began in February of 2008. My desire is to process through the events of that period from the perspective that a decade of time has brought ... for myself, really. But if you'd like to follow along, you're welcome to join me. 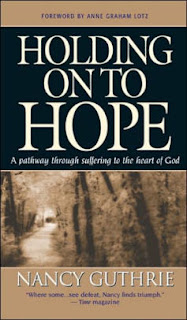 During the final days of Hannah's life, many people dropped by the hospice center and left books, gifts, food, and other items for our family.  These kindnesses were so greatly appreciated.

Most of these gifts were accompanied by a card indicating who had given them.  But one gift, a book called "Holding On To Hope" by Nancy Guthrie, was accompanied by a card signed only with the initials "plc".  When the book was brought to the room that Hannah and I shared, I read the back cover and discovered that it was Nancy's story about losing two babies to a congenital disorder called Zellweger syndrome.  It sounded like an interesting book, but frankly, I couldn't really see how it related to the situation in which we found ourselves.  Here I was with my 17-year-old daughter dying of cancer ... I wasn't sure how this book would be helpful to me.

But after Hannah went to Heaven and I was ready to read something again, this was the book I was drawn to out of all the books we had been given.  I picked it up and started reading it, and it was exactly what I needed to read.  Zellweger syndrome is a terminal condition, just as Hannah's cancer had been a terminal condition.  In her book, Nancy grappled with difficult issues of God's sovereignty in situations of terminal illness ... when you pray for healing, when you believe God can (and sometimes does) heal, yet He does not choose to heal your child.  It confirmed so much of what we had experienced in our year-long journey with Hannah.

At some point, I got on her website to learn more about her and her story.  A link labeled "Respite Retreats" caught my eye.  I clicked on it and discovered that she and her husband host retreats for bereaved parents in Nashville, Tennessee.  I was simultaneously intrigued and unsettled.

I was intrigued because of what I discussed in my last blog post.  Brad and I both craved interaction with other parents who had lost children, and this sounded like the perfect opportunity for that.  On one level, it sounded like a dream come true.

I was unsettled because this type of event was way outside of my comfort zone.  The thought of going somewhere I had never been to talk to people I had never met about the most painful experiences of my life was actually somewhat terrifying. As a classic introvert, that's exactly the type of situation I typically try to avoid.  I don't even go to retreats with women I know from our church!  I've just never seen myself as a "retreat" type of person.

I showed the retreat information to Brad and told him I thought it looked like a really cool thing that would probably be really helpful to us, but hastily added that I didn't want to go.  Brad, as a classic extrovert, would have gone without hesitation, but I just wasn't ready.

I did sign up for Nancy's e-newsletter before I left the website.  A few months later when I received her newsletter and read about the next Respite Retreat scheduled for that upcoming September, I once again brought the idea to Brad.  Though I was still pretty uncomfortable with the whole idea, I was ready.