This post is part of a year-long series ... Through this series of posts I plan to share our family's experiences in the last year of our 17-year-old daughter's life on earth, which spanned from February of 2008 to February of 2009. Many of you who read this blog followed our journey through the emails I wrote over the course of that year. My desire is to process through the events of that year from the perspective that a decade of time has brought ... for myself, really. But if you'd like to follow along, you're welcome to join me. 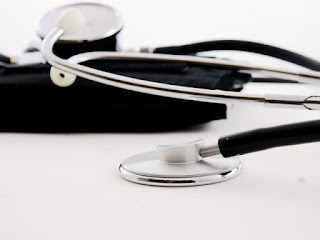 So we had two kids with two very different health problems to take to the doctor at the same time.   I was working as an independent contractor speech pathologist at that time, so if I missed work, I didn't get paid.  Their appointments were in the morning, so we decided that Brad would use half a sick day and bring them to doctor, then I would come home at lunch and spend the rest of the day with them so he could go on to work.

I went to work that morning, but I honestly don't remember anything I did while I was there.  I'm sure I saw my students, but my therapy couldn't have been very effective.  My mind was on my girls and what in the world was going on with them.  How could both of them have such weird health issues at the same time?

Finally I got my hours completed and headed home.  Brad and the girls arrived about the same time I did, and while they ate lunch, we talked.

They had done a new set of chest x-rays on Bethany to check the status of her pneumonia, but her lungs looked good.  The doctor suspected that her ongoing malaise and fatigue may be due to mononucleosis, so he had referred her to our local hospital for an ultrasound of her liver and spleen.  He had scheduled an appointment for this to be done that afternoon.

He described how the advanced practice nurse had done a thorough examination of Hannah, and everything seemed to be fine.  When she checked her pupil reactions, however, Hannah's pupils did not respond to the light.  Normally, pupils will constrict when a light is shined into them, but Hannah's did not.  They remained enlarged.  The APRN asked the doctor to come in and check her pupils, with the same results.

Because of these issues with her eyes, the doctor wrote a referral for Hannah to see an ophthalmologist, and made the appointment for that afternoon.  I was still taking all this in, when Brad handed me the written referral, and I saw the name of the ophthalmologist.  That name!  Could that be our friend Tommy from college ... the guy who had sung in our wedding over 20 years ago?   That's how he spelled his last name.  Was he a doctor now?  I guess we would find out!

So now we had two kids with two very different health problems going to two different doctors at the same time.  It was time to divide and conquer.  It was decided that I would take Bethany for her ultrasound and Brad would take Hannah to the ophthalmologist.  Hannah's doctor didn't seem to be terribly concerned at this point, and Bethany actually seemed to be far sicker than she was.

Bethany's appointment was uneventful.  The ultrasound was completed and we were told we'd probably get the results the next day.  I took her home and anxiously waited for Brad and Hannah to arrive.

When they got home, I grilled Brad for details.  The ophthalmologist was indeed our old friend Tommy, and they spent a good bit of their appointment getting re-acquainted.  Tommy examined her, and was able to get her pupils to constrict with the use of some eye drops.  He told Brad that the antihistamines we'd been giving her could possibly have caused the pupil dilation, but he added, "If it were my daughter, I'd want her to have an MRI."

An MRI was scheduled for the next morning.

Written by The Sullivan Four at 6:29 PM

Oh Jill, I am so glad you are doing this. I will be checking each day to catch the latest update. My heart was in my throat as I was reading, even though I knew the outcome. "See" you here tomorrow. . . Love, Debi