This post is #13 in a year-long series ... Through this series of posts I plan to share our family's experiences during our 17-year-old daughter's year-long battle with brain cancer, which began in February of 2008. My desire is to process through the events of that year from the perspective that a decade of time has brought ... for myself, really. But if you'd like to follow along, you're welcome to join me.

Brad and Bethany arrived at the hospital around 8:00 that morning, and they were a welcome sight after our long night in the PICU.  It had been such a relief to see the sun rise that morning and know that we had made it through that first night.  With the bright rays of sunshine, our fears seemed to dissipate.

A dear friend who lived in Little Rock had given us her house key on the day Hannah was admitted to the hospital, telling us that we could go to her house and crash any time we needed to.  It was time to take her up on that offer.  I was exhausted after less than two hours sleep each of the two previous nights, and was getting desperate for rest.  So Bethany and I headed to Sarah's house.

I was able to take a shower for the first time in a couple of days, but had to put the same clothes back on that I'd been wearing since the day before.  I laid down on a bed in an upstairs bedroom and managed to sleep for about an hour.  I was anxious to get back to the hospital, so we headed back there, grabbing some lunch from Sonic on the way.

The three of us sat with Hannah for a few hours in ICU.  We knew at some point during the day she would have an MRI, but had no idea what time it would take place.  We had already learned that the concept of time means something completely different in a hospital than it does in the outside world!  Our parents, who were staying in our home, came by to visit and brought Bethany back home with them when they left.

Finally it was time for the MRI.  They rolled Hannah down to the MRI area in her bed, but then had to transfer her from that bed to the hard MRI table ... that was hard to watch!  We were both able to remain in the room with her, which was a comfort to all three of us.  I was very thankful that she was able to lie still and relatively pain-free throughout the scan, even though she had to rest her head on her incision.  It also seemed mercifully shorter than her previous MRIs had been.

Once the MRI was complete, we returned to the PICU.  Our surgeon came to by to see Hannah and told us that the new MRI looked good.  Brad asked if we could see the results, and he took us to another room and showed us the scans on a computer.  He put the before and after pictures side by side so we could see the difference ... And what a wonderful difference there was!

The doctor confirmed that the tumor did not appear to be the kind which could be easily treated with radiation, and that was why they had removed it all.  He explained that when the biopsy results came back, the tumor type would be ranked from a 1 to a 4, but that even if it was a 4, it was treatable.  He explained that there were three possibilities at this point:  1) No further treatment would be necessary; 2) They might have to treat that area with radiation to make sure it didn't return; or 3) radiation along with chemotherapy would be necessary.  The biopsy results would tell us which option was to be ours.

My brain got stuck at that point.  Radiation?  Chemotherapy?  Those were treatments for people who had cancer, and Hannah didn't have cancer!  We had no history of cancer in our family; Hannah was just sixteen years old; she had been completely fine just a few days ago; everybody was praying for her ... There was no way this was cancer.  Just another thought for me to dismiss.  Hannah was going to be fine.

We returned to PICU and told Hannah just that ... the tumor had been successfully removed and she was going to be just fine.  Overall, we were feeling really good about what we had been told.  That big black spot in the middle of the MRI scan where that ghostly white tumor had once been was certainly confirmation that everything was going to be okay.


Looking back at this day from the perspective that ten years has brought, I'm so thankful for our blissful ignorance at that point.  I'm grateful that we knew nothing of the childhood cancer world, that we could not see the rounds of radiation and chemotherapy ahead of us, and that for at least a little bit longer we thought that just maybe our lives were going to return to normal after all.

Most of all, I'm thankful we did not know that exactly one year from that date in February Hannah would be leaving us for Heaven.  I'm also grateful for the year God granted us with her ... even with all its heartaches and its ultimate heartbreak.

Because really, this story is not about me, or Brad, or Bethany, and it's not even about Hannah.  It never was.  It's about God and His Kingdom and the role we have been allowed to play in it.  I was reminded of that as I stood in the sunshine showering Hannah's grave on the hillside with rose petals today.  Her prayer to be used by God in her storm has been answered many times over, and is still being answered even nine years later ... and I am grateful. 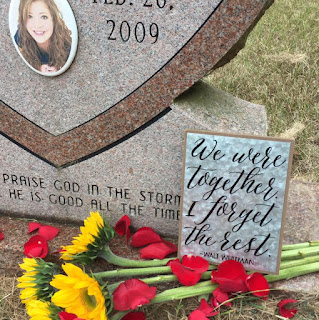 Written by The Sullivan Four at 3:08 PM