Tell About It Tuesday -- "The Seasons of God" by Richard Blackaby 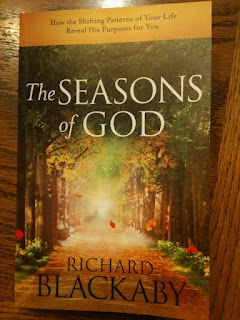 A few months ago, I received an email (out of the blue!) from Dr. Richard Blackaby.  To say that I was stunned would be an understatement.  You may recognize the name Blackaby from the well-known Bible study, "Experiencing God."  That study was written by Henry Blackaby, Richard's father.  Richard is quite a prolific author himself, and is now president of Blackaby Ministries International.

So how did I come to receive an email from this gentleman?  Let me give you a little background.

Our church has been fortunate enough to have had various members of the Blackaby family come and lead a mini-revival every fall for the last several years.  Henry has come a couple of times, another of his sons, Tom, came last year, and Richard has either accompanied them or come solo every year.  They are dynamic speakers, and we always make an effort to attend every service when they come.

In 2008, Henry and Richard came to our church the last weekend of September.  On that Sunday morning, our family was there, all four of us, along with several members of our extended family.  Our relatives had come to see us that weekend because we had just received the devastating news that Hannah's cancer had returned with a vengeance.  Her oncologist had informed us that her prognosis was very grim.

So there we were in church that Sunday, broken hearted and already grieving.  At the end of the service, our pastor called us to the front, and the congregation spent several minutes praying over Hannah and our family.  After that, we had the opportunity to speak with Richard, and we shared with him about Hannah's prayer for a storm.  He met Hannah that day, and spent several minutes talking with our family.

By the time the Blackabys returned in 2009, Hannah had gone to Heaven.  We spoke to Richard after one of the services, and he remembered all about Hannah and her storm.  And each year when he's returned to Hot Springs, we've always spent a few minutes visiting with him.  I've always been impressed by the fact that he remembers our names from year to year.  He asked us once for our contact information, and we gave him one of our cards.  He stuck it in his wallet, and I assumed that he promptly forgot about it.

Well, I was wrong.  He apparently pulled that card out a few months ago, and sent us an email.  In that email, he asked if we would mind if he included Hannah's story in a new book he was writing.  If it was okay with us, he would send us a rough draft of what he was planning to include for our approval.  Um, yeah ... That was fine with us!  He sent us the rough draft of what he had written, and we heartily approved.  He told her story in a way that we felt truly honored Hannah, and more importantly, honored God.

Yesterday, we received an advance copy of the book in the mail.  And sure enough, there on pages 52 and 53, under the heading "Escape from Mediocrity" is our daughter's story.  It concludes with the lines, "Hannah didn't live long, but she lived well.  And her legacy continues."

I started reading the book this morning, and I can already tell I'm going to love it.  We all know there are seasons in life, and it appears that the gist of this book will be to discuss how we can not just survive, but thrive, in each of these seasons.  I can really relate to that, because that is one of our goals for "While We're Waiting" ... to encourage all of us who have lost children to not just survive, but to thrive, while we're waiting to be reunited with our kids one day.  The book is scheduled to be released on August 21st, and I encourage you to pick up a copy.  And not because Hannah's story is in it ... truly, her story is only a teeny, tiny part of the book ... but because we all need to discover God's purposes for us in the seasons of our lives.


"To everything there is a season, a time for every purpose under Heaven."  Ecclesiastes 3:1

Written by The Sullivan Four at 12:18 PM

Email ThisBlogThis!Share to TwitterShare to FacebookShare to Pinterest
Labels: Tell About It Tuesday, While We're Waiting

Thanks for sharing. I wondered if there was a story behind the story and there was! God is so good at engineering our lives so that they intersect with each other at the right time and for His glory. I really, really think it's awesome that Hannah's story is in this book. It doesn't matter if it's 2 pages or 20 or whatever. The more people who hear it, the more people will be blessed. Undoubtedly.

Wow, what an amazing story. I can't wait to read that book. God is so good!
Love, Kelley