Tell About It Tuesday -- "While We're Waiting" CureSearch Walk Team

Last October, we had the privilege of participating in the first annual Arkansas CureSearch Walk.  This is a walk to promote awareness and raise funds for pediatric cancer research.  You can read about last year's event by clicking here.  We had a great time, and the walk was a huge success, with over $50,000 raised for a very good cause.

One of the things that we really enjoyed about that day was seeing several of the kids who were receiving treatment at Arkansas Children's Hospital during the time that we were spending so much time there ourselves.  It was wonderful to see those kids running and playing, happy and healthy.  There were also many families there whose children were still in treatment.  The CureSearch Walk is similar to Relay for Life, in that teams are formed for fundraising and fellowship purposes.  Each of these kids had his or her own team, all with clever names and colorful t-shirts.

As parents whose child had not survived her cancer, we couldn't help but feel a little out of place.  We had no "team" to belong to.  We walked with our friends, Bobby and Amy Smith, whose son, Joel, is also in Heaven following his brave battle with cancer.  And like I said, we enjoyed the day ... but we felt a little bit out of place.  It just seemed as though there should be a team for those of us who had children in Heaven.

Well, on October 6th, we will be returning to the CureSearch Walk, but this time we will be participating as Team "While We're Waiting."  This will be a team for those of us who are seeking to live well while we're waiting to be reunited with our children in Heaven one day.  Our friends, Bobby and Amy Smith, will be walking with us again, and we'd like to invite you to participate as well ... if you can make it to Murray Park in Little Rock to walk with us, we would love it!

The event kicks off with registration between 8:30-9:30 a.m., followed by the opening ceremony, and then the walk.  The walk is the length of a 5K, but it is a walk, not a run.  The route of the walk takes us across the Big Dam Bridge and back (assuming it's the same as last year).

Or, if you'd like to join our team as a "virtual walker", that would be great, too.  Maybe you live too far from Little Rock to participate, but you'd like to make a donation to the fight against pediatric cancer.  We'd love for you to be part of While We're Waiting's "virtual" team.

Take a look at this picture from last year ... 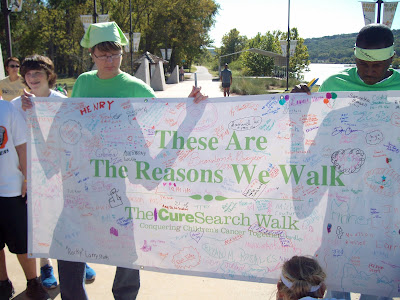 That banner is full of names of kids whose lives have been touched by cancer ... just in Arkansas.  If you look closely, right in the lower middle part of the banner, just under the words CureSearch, you'll see a heart with the name "Hannah Joy" in it.  She is just one of the many reasons we walk!

Written by The Sullivan Four at 7:40 PM

Email ThisBlogThis!Share to TwitterShare to FacebookShare to Pinterest
Labels: Tell About It Tuesday, While We're Waiting