Well, tonight marked the official end of Bethany's junior high basketball career. All the winter weather last week caused their district tournament to be postponed until Saturday. They played two games on Saturday and won both, putting them into the finals of the tournament. I've included a couple of pictures below... 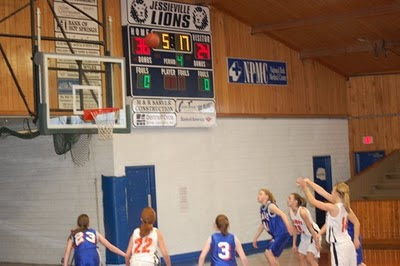 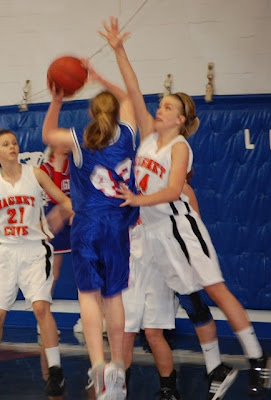 The finals were tonight, and unfortunately, Bethany's team came up short. They were beaten by the one team who had beaten them all year. So that ends their junior high season with a record of 21-2. But that doesn't mean the end of basketball this year...now that the junior high season is officially over, the freshman players can move up to the high school team. So as of tomorrow night, she will be playing with the senior high during their district tournament this week. Good thing we like watching basketball!

February 16th doesn't just mark the end of junior high basketball in our family...it also marks the anniversary of Hannah's last day in our home. A year ago this morning, I went into Hannah's room about 4:30 in the morning to find that she had been bleeding heavily from her mouth and nose. She had been battling low platelets for a long time, and she was taking a chemotherapy drug which had hemorrhage as a primary side effect. I called Brad in to her room and we tried to decide whether to call an ambulance or not. We really didn't want to do that and scare Bethany to death, so we loaded Hannah up in the car and headed to Little Rock as fast as we dared to drive, figuring we could stop at the hospital in Benton on the way if we needed to. We called a precious neighbor to come over to our house to stay with Bethany, who we left sleeping in her bed. One amazing thing about that morning is that Hannah was not in any distress...she really didn't even seem to be aware that there was a problem. If she had been panicking, it would have been much harder for us to hold it together that day. We arrived at Children's Hospital in about 40 minutes (it's a 50 mile drive), and came in through the ER. By this time, the blood flow had nearly stopped.

An MRI was scheduled for that morning. And again, we were amazed at Hannah's calmness and peace as she lay in that tube for nearly an hour. We were admitted and platelet infusions were begun. By this time, a lot of our family had arrived, including Bethany, who was brought to the hospital by Brad's brother. Our doctor came in that afternoon and shared with Brad and me that the results of the MRI were "disturbing"...the cancer had progressed rapidly and had spread pretty much throughout her brain. He described what we could expect in the upcoming days...that the tumors around her brainstem (which controls the automatic functions of the body like blood pressure and respiration) were slowly going to cause her blood pressure to rise and would ultimately cause her brain to stop telling her body to breathe. Then he came into the room and told Hannah that there was no more that could be done for her medically. Hannah clearly understood what he was telling her and accepted the news with grace and without fear. Later that afternoon, while family members sat with Hannah, we met with the hospital social worker and worked out the details of transferring her to a hospice center. That night, there were no beeping monitors and no nurses coming in and out of our room all night. It was actually somewhat of a relief to be freed from all of that.

We didn't know when we helped Hannah out the door that morning that it would be the last time she would be in this house. We are so, so, so grateful that God led us to go to a hospice center for Hannah's final days rather than trying to take care of her needs at home. I am so glad that those difficult memories are not associated with this house. But it is so hard to believe that it's been a year since her physical presence was last in this living room where I am sitting tonight. Her absence has left a gaping, empty hole in our home and in our family. How thankful I am that God's presence is here in our home helping to fill that painful hole.

Just before I started this post tonight, I read a new comment on my previous post. You can see it yourself if you click on the comment section under the last post. The writer told me that this week marks a year since her best friend was saved, directly due to Hannah's storm, and that her friend has been on fire for the Lord ever since. What amazing timing for me to read tonight, as the waves of grief threaten to overturn the ship. Hannah's storm had a purpose, and that continues to be confirmed, even today, a year after one of the most difficult days of our lives. God's timing is always perfect, even when it's hard to see through the wind and waves!

Written by The Sullivan Four at 8:59 PM

Jill, Brad and Bethany!
I must say I love to read your post. I can imagine how hard they are at times to finish, but I agree that it is therapy!! I feel the same way every time I post about Alan. Anytime I read something about Hannah I pull myself back together and remember how strong she was and everything you all have been through. What an inspiration!
Hannah's story has touched sooo many people!
We are always praying for you guys!
Melissa

Oh how vividly Jerry and I remember Feb 16, 2009. The fact that you, Brad, Hannah,and Bethany welcomed us in your hospital room that afternoon and night was such an honor. We witnessed the peace that Hannah demonstrated first hand. And on our drive to MC to pack for you and your family was a surreal time for me. All the emotion became a task that needed to be accomplished--and I seemed to forget, somehow, what it all meant..until we were standing in your living room and verbalized that Hannah would never return to your home, that she'd never pet Lacee again...and so many other things...that was such a difficult yet hopeful moment--in that her earthly battle would soon become a Heavenly victory! In case you don't know, we're extremely mindful of the grace you, Brad, and Bethany showed in allowing us to share in the events of that day personally. I'll never forget it, or your precious Hannah.

I remember so well sitting in my chair at work following your emails as those last days unfolded. I know I was just one of so many people that followed every beautiful yet heartbreaking email you wrote and forwarded them on to others so they could also be lifting your family up in prayer as you went through every parent's worst nightmare. This past year, I have run across many a scripture and I will recall that you used it in an update on Hannah, and I hope you know how much you ministered to me and I know many others as well as you typed out each email. God bless you, Brad and Bethany today and in the days to come!