In this series of posts I've been doing about February memories, I would be remiss if I didn't include some good memories along with the bad. It is a testament to God's goodness that there are some real blessings to share from last February.

On Hannah's last day at Children's Hospital before we moved to hospice, some dear friends brought us a box of Krispy Kreme doughnuts. Hannah ate a couple bites of one and remarked, "These are good, but they're not as good as spudnuts." Now, if you're wondering what in the world a "spudnut" is, let me fill you in. In El Dorado, Arkansas, there is a little hole in the wall called the Spudnut Shop, where they make the most delicious doughnuts in the world. I am told that they are made with potato flour...thus the name. If you are willing to stand in a long line on a Saturday morning, you can experience the sweet sensation of a hot spudnut melting in your mouth. We lived in El Dorado for several years, and picked up spudnuts for breakfast probably more often than we should have. There is even a Facebook group dedicated to El Dorado Spudnut Fanatics, from which I stole these pictures. 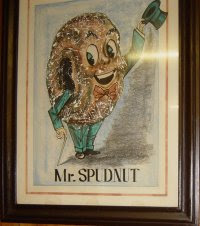 Anyway, in my email update that evening, I mentioned that she had said that...mostly for the benefit of all our friends from El Dorado who share our love for the spudnut. Would you believe that the next day a man showed up at the hospice center with four dozen spudnuts? And he wasn't from El Dorado...he was from Fort Smith, and had driven from there to El Dorado and then to Little Rock to bring Hannah these spudnuts. And that's not all...in the next few days, we received three dozen more spudnuts...one box even arriving in the mail. I think every nurse at the hospice center, every visitor, and every family member got to sample a spudnut at some point during the eight days we were there. We had a lot of fun with those spudnuts, and were absolutely awed by people's kindness in providing them to us.

Another kind of fun memory we have from that time is when Brad's brother Mark (better known as "Sully" to most people) came into Hannah's room one evening. Now Mark is...how I shall I say this politely...a rather large man, sort of a gentle giant. As soon as he greeted her, she said, "Uncle Mark...You look like you've lost weight." We got a real kick out of this because this was vintage Hannah...she was a natural encourager, and she was always saying things like that to people. At this point, Hannah's vision had deteriorated to the point where she really could see very little, so we knew she really couldn't see him. She also had not spoken much at all in a couple of days. We were able to have a little bit of conversation with her that evening, and it turned out to be our last real conversation we had with her. We just thought it was neat that Hannah began this conversation with an encouraging word for her uncle. It was also a real blessing to have Hannah's Uncle Mark there with us...he was between jobs, so he spent quite a bit of time with us during those eight days...running errands, answering the innumerable phone calls, etc. It was also a blessing that by the time that week ended, he had two job offers.

Our entire family was a blessing to us during that hospice period, but we felt especially fortunate to have my brother and sister-in-law, who are missionaries in Indonesia, with us during that time. They stay on the mission field for 3 1/2 years at a time, and get to come home for six month furloughs. Their furlough had begun in December, so they got to spend some quality time with Hannah before her health really deteriorated, and they were able to share the last days of her life with us as well.

We were blessed to have many wonderful visitors during that time, but I was especially touched by the visits from Hannah's friends. I am sure that I would not have had the courage to visit someone dying of cancer when I was in high school, but these girls bravely came in to see their friend. Three of them came in together. They were on their way to a youth retreat weekend, and as they were leaving, Hannah said, "Y'all have fun." Again, a surprise to those of us who rarely heard her speak in those days.

There are a few more blessings to share... but I'll save those for another day.

Written by The Sullivan Four at 2:19 PM