This post is #186 in a year-long series ... Through this series of posts I plan to share our family's experiences during our 17-year-old daughter's year-long battle with brain cancer, which began in February of 2008. My desire is to process through the events of that year from the perspective that a decade of time has brought ... for myself, really. But if you'd like to follow along, you're welcome to join me. 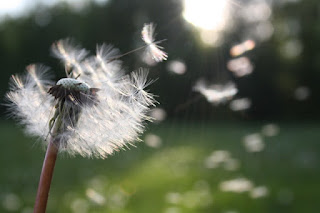 The entire time we were at the hospice center had a distinct air of unreality.  The fact that we had reached the point where we were re-living the anniversaries of the events which had brought us to this place just added to that sense of illusion.  Surely this wasn't happening to our family.  Surely this was all some kind of crazy dream.  Surely Hannah was going to be fine.

But no ... there we were, in a hospice center with our 17-year-old daughter whose grasp on this life was becoming more tenuous.

And no matter how surreal the situation was, there were still practical matters which needed to be taken care of.  We were nearing the end of Hannah's TEFRA coverage.  It would expire on February 28th, and if we didn't renew it, we would be without this supplemental insurance program.  The application was 16 pages long and required a premium check of $333.00 for a 3-month extension.

Should we renew it or not?  The doctors couldn't tell us how long Hannah would be with us ... probably just days at this point, but maybe longer.  Yes, she might live on into the month of March, but maybe not.  I really didn't want to take the time and energy away from Hannah to fill out that pile of paperwork if I didn't have to.  Yet I desperately wanted her to still need it!  We decided to give it another day or two to see how things went.

Another practical matter to tend to -- Hannah had worn a small diamond ring on the third finger of her left hand for a few years now.  This ring was a special gift from her dad, given to her on her 13th birthday when he took her out on a date and talked with her about boys and purity and her future husband.  She loved that ring and was still wearing it, though her fingers had become so thin I was afraid it would slip off and get lost in the sheets of her hospice bed.  I gently removed it and placed it on the third finger of my right hand, where it remains to this day.  She wouldn't be needing it anymore.

As the day wore on, Hannah's comfort became more of an issue.  She was no longer able to communicate verbally, but pointed with her index finger when she wanted the head of her bed raised or lowered; or at least we thought that's what she was trying to tell us.  Up and down, up and down all afternoon ... nothing seemed to bring her relief.  Finally we identified what was causing her to be so uncomfortable and the doctor came in, performed a simple procedure, and at last she was able to relax.

What a relief to see her slip into a sound sleep that evening after such a restless day!  We were still hearing the echoes of what her oncologist had told us a week previously, that due to the location of the tumors on her brainstem she would simply and peacefully just stop breathing when God called her home.  Because of that, we always seemed to be anxiously watching her breathe ... not knowing when that last breath would come.

But that night, she breathed deeply and peacefully as she slept and it was a gift to my weary soul.

Today marks the one year anniversary of Hannah's brain surgery.  It's been very surreal to relive these dates in February in this current situation. She's had another rather restless day, but they have now put her on a morphine pump, so she can have a steady flow of pain relief rather than having to wait for the nurse to come with the injection each time. We are hopeful that this will really make a difference for her.

We want to thank everyone for the many, many emails, calls, cards, gifts, meals, etc. We spend a lot of our time reading our email and snail mail (much of it from people we don't even know!) and we are saving every single one...even though we are unable to respond to most of them due to sheer volume. What a blessing you have been to our family!

God is good all the time!

Brad, Jill, and Bethany
Written by The Sullivan Four at 5:06 PM