Hannah's Story ... In Her Own Words

This post is #100 in a year-long series ... Through this series of posts I plan to share our family's experiences during our 17-year-old daughter's year-long battle with brain cancer, which began in February of 2008. My desire is to process through the events of that year from the perspective that a decade of time has brought ... for myself, really. But if you'd like to follow along, you're welcome to join me. 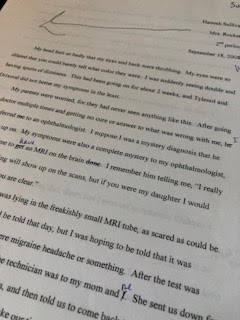 Ten years ago today, Hannah turned in a rough draft of an essay to her second period English teacher.  The students had been assigned the task of writing about an experience that impacted their life.

Here is Hannah's story in her own words ...

My head hurt so badly that my eyes and back were throbbing.  My eyes were so dilated that you could barely tell what color they were.  I was suddenly seeing double and having spurts of dizziness.  This had been going on for about 2 weeks, and Tylenol and Drixoral did not better my symptoms in the least.

My parents were worried, for they had never seen anything like this.  After going to the doctor multiple times and getting no cure or answer to what was wrong with me, I was finally referred to an ophthalmologist.  I suppose I was a mystery diagnosis that he finally gave up on.  My symptoms were also a complete mystery to my ophthalmologist, so he referred me to have an MRI on the brain.  I remember him telling me, "I really don't think anything will show up on the scans, but if you were my daughter I would want to make sure you were clear."

The next day I was lying in the freakishly small MRI tube, as scared as could be.  I had no clue what I would be told that day, but I was hoping to be told that it was nothing, just a severe migraine headache or something.  After the test was over, I noticed how extra nice the technician was to my mom and me.  She sent us down for a free lunch in the hospital cafeteria, and then told us to come back to the MRI suite when we had finished eating and to take our time.  When we came back, she pulled our chairs very close together and told us to make ourselves comfortable.  I then noticed that she was acting strangely, and being a little too friendly.  My mom noticed it too, but reassured me that she must do this for everyone and it was simply procedure.  I didn't buy it.  The next thing I knew, the technician returned and said that our ophthalmologist was coming over to talk to us.  That scared my mom and me to death!

He came in with a very serious and sad expression, and took a seat in front of us and told me the news that would change my life forever.  I remember him saying, "Well, I've looked at the scans, and there is something rather large in your brain.  It is not normal, and it will require further treatment, but it is what it is, and we will have to deal with it and fight it."  With his words, my heart started to beat so fast, and tears were pouring down my face.  I looked at my mom and she was crying too.  Then he prayed with us, and I felt a rush of peace like no other.  It was like God was telling me that everything would be okay, and that I would make it through it.  That afternoon, my mom and I faced the struggles of telling family members about my brain tumor.  My dad, sister, and grandparents probably took it the worst.  It was a Wednesday night, so word got out fast at churches, and they had prayer sessions.

The next morning, my mom, dad, sister, and I were off to Arkansas Children's Hospital where they admitted me to a hospital room right away.  Many of the doctors were worried about the pressure in my brain, so they placed an emergency shunt kit on my bedside table.  This would allow them to quickly make a hole in my skull to drain off excess fluid if needed.  Throughout the few days before brain surgery, I was flooded with love and support from friends, relatives, teachers, and people that I didn't even know.  My hospital room was completely filled with visitors, stuffed animals, flowers, balloons, and snacks around the clock.  I loved the company at the time, because I had nothing else to do.  They lifted my spirits.

After reading the risks involved with the surgery, I was very nervous.  I really did not want to know that there was a possibility of death or blindness involved.  I kept telling my parents that I hoped I would be the same person after surgery, and that it would not change my personality.  That was probably my worst fear.  Before being rolled out on the morning of the surgery, I told all my family that I loved them, and that I hoped that I would be the same person coming out.   I kept on praying that the surgeons could remove the whole tumor, and not damage my brain doing so.  I went into surgery nervous, but with the highest hopes.

I clearly remember being rolled out of surgery, barely conscious.  The surgeon was at my head and I asked, just having the energy to say, "Is it gone?"  He said, "Yes, Hannah, it's all completely gone."  After hearing those words, tears started rolling off my cheeks.  I was just so relieved and thankful that everything went well.

Next, I had another hurdle to jump over:  recovery.  Before surgery, I had just been thinking about getting through surgery, and had not really thought of what I might feel like post surgery.  It was awful.  My neck was so stiff that I could not move it at all, because the surgeons had cut through my neck muscles.  That meant I had to have help doing basically everything.  I would never think that one would use their neck that much, but when its function is lost, it's obvious!  I also could not lift my eyes, because they had to cut through my eye muscles as well.  It was so awful that I could not raise my eyes to watch the television from my bed.  I suddenly did not want any visitors, because I felt like I looked so awful.  I certainly did not have enough energy to be smiley and bubbly in order to entertain guests.  I knew, though, that very soon I would get the go ahead to go home.  I was so excited, because I had not stepped foot from the hospital in almost three weeks.

The day I went home, I wanted to kiss the floor!  If only I could have gotten my neck to bend, I would have.  All of my extended family that could have been at my house were there, complete with their welcome home signs, streamers, balloons, hugs, and kisses.  At that moment, I realized how truly blessed I was.  I had wonderful friends, family, faith, and a life to live!  If those doctors would not have been at Arkansas Children's Hospital, I might not have been alive today!  Little did I know, my main surgeon is one of the three doctors in the world that would have even attempted surgery in that region of the brain, and the brain tumor happened to be a very malignant type of fast growing cancer.  Even though it was a horrible time in my life, I would not wish to go back in time and erase it from my memory.  It taught me so many valuable experiences, like how precious life is and how truly blessed I am.  I would not trade it for anything.
Written by The Sullivan Four at 10:04 AM