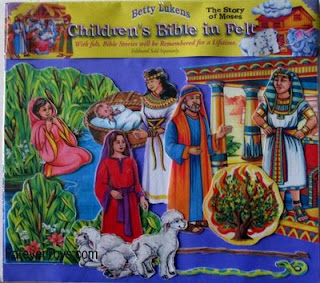 Oh, the blog has been sooooo quiet lately.

Unfortunately, it's probably going to stay that way for awhile.

Our school district is making up its snow days by tacking an extra hour to the end of each school day.  That will be wonderful at the end of May, when we're out of school and everyone else is still going ... but for now, it's making very long work days.  The remainder of the evening is spent getting caught up on While We're Waiting stuff, which I love doing ... but that doesn't leave much time for blogging.

I hate the thought of the blog just sitting dark so much, though, so I've decided to incorporate Facebook's "Throwback Thursday" theme into the blog. On Thursdays, I'm going to re-post some of my personal favorite blog posts from the past.  I hope you enjoy these, because it's probably all you're going to see on here for awhile ... at least until school is out!  :-)

Here's the first Throwback Thursday post from Saturday, March 6, 2010, just a little over a year after Hannah went to Heaven.

I have such great memories of the little church where I grew up...First Baptist Church of Phillips, Wisconsin. Every Wednesday afternoon, my brother and I would walk from school to church for CYF. There were probably only about 10 or 12 kids that came, but our pastor, Arlo Little, was there every single Wednesday to play games with us and teach us a Bible lesson.

When it was warm enough outside, we would play baseball (that's when I discovered that I was not an athlete). When it was cold outside, which was pretty much the whole school year, we would play games in the basement of the church, where we had our Bible story time. My favorite one involved a pincushion which the pastor would hide somewhere in our meeting room (it seemed like a huge room at the time, although I think it was actually quite small) and we would have to find it. He would tell us if we were hot or cold until we found it, and then we would do it all over again. I remember the excitement of getting warm, then warmer, then steaming, then boiling, then blazing as we got closer and closer to that little pincushion.

I liked the games, but I loved it when he would tell the Bible story and get out the flannelgraph stuff. I loved the flannelgraph background, looking like it had been drawn with colorful pastels, and all those flannel-backed figures, dressed in their Bible-time robes. I especially loved the animals...the camels, donkeys, and sheep. I learned lots of Bible stories in that basement in northern Wisconsin.
Yesterday morning, I was reading my daily excerpt from "The One Year Book of Hope" by Nancy Guthrie (an excellent book for anyone who has experienced the loss of a loved one) and she referenced the story of Shadrach, Meshach, and Abednego and the fiery furnace. I was immediately back in that church basement, seeing those flannel graph figures and hearing the story told by my pastor. And yesterday evening, I was reading "Letters from the Land of Cancer" by Walter Wangerin, Jr., (an excellent book for anyone traveling through the land of cancer) and, would you believe, he referenced the same story. And both authors emphasized a part of the story that I had never really given much thought to before. You may remember that Shadrach, Meshach, and Abednego were thrown into the fiery furnace because they refused to worship a gold statue of the Babylonian king. Here's what they said to the king, "O Nebuchadnezzar, we do not need to defend ourselves before you. If we are thrown into the blazing furnace, the God whom we serve is able to save us. He will rescue us from your power, Your Majesty. But even if He does not, Your Majesty can be sure that we will never serve your gods or worship the gold statue you have set up." Daniel 3:16-18.I've always thought of them as Biblical heroes because they refused to bow down to an idol, even under threat of death. And while that was heroic, I've decided that their real heroism is reflected in the statement, "But even if He does not...". On the surface, it may look like they were giving God an escape clause, something to protect His reputation in case they burned up in the furnace. But I don't think so. They didn't pretend to know what God would do, nor did they try to tell Him what to do. I think they trusted Him to the point that they knew whatever He would do what was right, even if it resulted in their death. God was God however He chose to act.This was the same understanding we came to as we watched Hannah's life slowly leave her. That "even if He does not", we would continue to trust Him. And I've seen this attitude replicated in the lives of several of the cancer patients we've come to know as we've traveled this journey. We've been asked by a friend to help her choose music for her own funeral, and this afternoon I will be burning a CD of songs for her to listen to. She has such a glowing peace about her as she contemplates her own death, which, according to her doctors, is approaching. She knows that "even if He does not" heal her in this life, He will in the next.

What a difference it makes when we face life, and death, with this kind of attitude!

Written by The Sullivan Four at 7:58 PM

Thank you for the post from your heart. I am catching-up on WWW posts. I put them all into a folder so I wouldn't miss anyone I know or a truly helpful post. Karen
Rix Wieman