Thoughtful Thursday -- The Rest of the Story

As promised, here's the continuation of my last post about Wind Chimes and Rocks.

Because as with any great story, there's more to be told.

First, though ... a couple of pictures so you can see how special these gifts really were.

The wind chimes hanging on the archway, just where I imagined them that morning ... 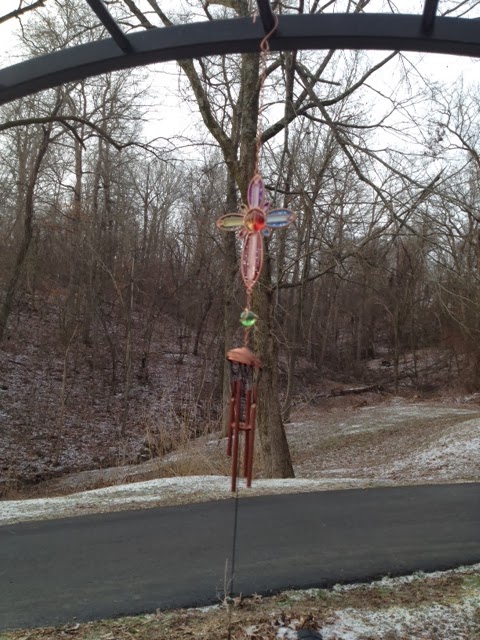 And the JOY rock on Hannah's windowsill, taking the place of the one I left on her grave that day ... 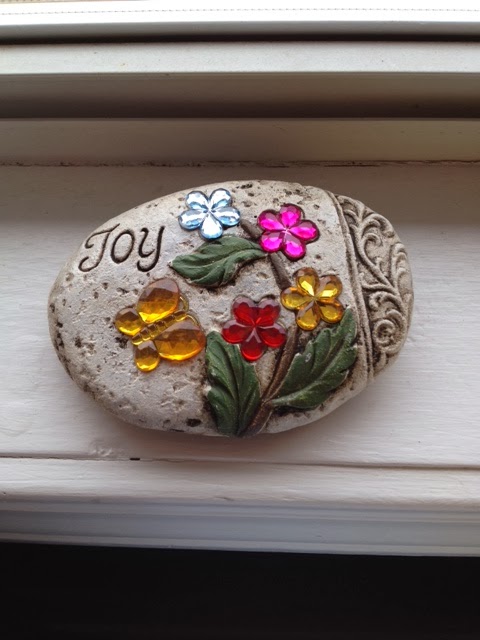 When I opened the gift bag that night and found these wonderful surprises, I sat right down at my computer and wrote my friend Christy a private message.  I was so excited, and I told her the whole story, including the fact that I just couldn't stop shaking my head about the way God had worked through her gifts.  With her permission, I'd like to share with you a little of what she said in reply.

Thank you for sharing that with me !!  As I was reading your message I too was shaking my head and saying WOW !!   That truly was a God thing.    As I said, I had remembered you saying that the next time we met would be 5 Years, well as it got closer I knew I wanted to give you something. I had looked for something on about 3 different occasions, not really having anything specific in mind but nothing just really jumped out at me.   Well I had to pick up a few things in Hot Springs on Monday and was a little short on time,    But I continued to look.   Well I found a couple of things, had them in my hand but for some reason put them back.  Well I then turned around and there was the chimes and the rock , as I picked them up I glanced at the time so I said ok I will just get these. It's the thought that really counts right.  When I got in the car to leave it hit me. I just bought Jill a "Rock".  And I kept imagining the look of "what is this" you would have when you received it and yes for the next 2 days, I really felt silly for giving you a rock.   But at the same time I had a peace about it.  Still, that's why when I handed you the gift, I said " I know this is not much but".   Wow, that is all I can say, except for praying and thanking Him for using me in such a way.   With a Rock and chimes none the less!!  I stand more and more amazed each day!!

Here's the thing that's so cool to me.  Christy was prompted by God to do something for me, and she was obedient to that prompting ... even though she didn't know why she was doing what she was doing.  Not only that, but she even felt a little bit silly about it.  But she didn't let that stop her.  She did it anyway, and something that seemed like such a little thing (and maybe even a silly thing) to her, was absolutely huge to me.

We never know how our actions of obedience impact others.

Two other examples of this. A little over five years ago, a lady obeyed God's prompting and anonymously left a book at the desk of the hospice center where we were spending Hannah's last days. A small gift, and maybe one that she felt a little funny about giving since that book was about the loss of a baby (actually two babies) and here we were in a hospice center with a 17-year-old. Nonetheless, she was obedient, and ultimately, that gift led to the formation of While We're Waiting, our ministry to bereaved parents.  A small act of obedience with huge ramifications.

Let me leave you with my final example, and I share it with my friend Christy's permission.  Christy is the one who gave me the gifts pictured above, and Christy's 17-year-old son, Ryan, went to Heaven back in September.  Back when Ryan was little more than a toddler, their family was living their lives far from God, and were content with that lifestyle.  One day, their neighbor, an 11-year-old girl, came over to their house, handed them some tickets, and invited them to a "Heavens' Gates & Hell's Flames" drama taking place at their church.  They didn't really want to go, but they didn't want to disappoint this sweet little girl, so they did.  That night was a turning point in their lives as a family.  From that point on, they dedicated their lives to the Lord, became involved in church, and raised their son in a Christian home.  As a result, Ryan turned his life over to the Lord as a young child.

And today, Ryan is in Heaven with his Lord and Savior ... all due to an 11-year-old girl's obedience.

Don't ever disregard the prompting of the Holy Spirit.  The implications of a single act of obedience can have eternal ramifications.

Written by The Sullivan Four at 6:45 PM

Another WOW...Jill, I can not even imagine what you and your family have been through losing a precious child. My very dear friends have lost a child and I have watched them since his death in December of 2005.. He was 15. My prayer is that they will continue to grow closer to God and maybe.. just maybe she will find a way to forgive.. His death was sudden..they did not get to say bye.. I can not even imagine being able to say "goodbye".. Or not being able to "goodbye".... Back to your post.. God Is Good All The Time.... & .. All The Time.. God Is Good..