Tell About It Tuesday -- "WWWW for Dads" Report

Well, the first "While We're Waiting Weekend for Dads" is in the book, and from all accounts, it was a huge success.  The guys all arrived at the farmhouse in Briggsville on Friday evening after work, and things officially kicked off with a huge country breakfast on Saturday morning.  They spent the day sharing their kids' stories... 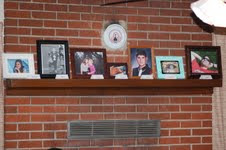 ...riding 4-wheelers, finding arrowheads, and sitting around the pond eating lunch and talking... 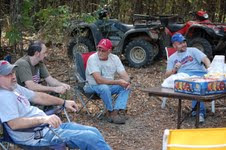 ...climbing up in deer stands and taking pictures of wildlife (sorry, don't have any of those to share); and then having a steak dinner waiting for them when they got back to the house.  Brad's dad and brother did a great job of cooking for the guys and waiting on them throughout the weekend. 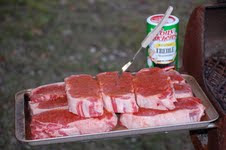 After dinner, I'm told they stayed up until nearly midnight discussing various topics they all face as Dads who have lost children.  The weekend wrapped up on Sunday morning, with a time of reflection on how they can live their lives for the Lord while they're waiting to be reunited with their children in Heaven.﻿ 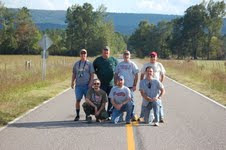 What an awesome group of Dads...Dads who love and miss their children and are traveling a road they would never have chosen to travel, but who are determined to honor their kids and their Lord by living with purpose while they're waiting!

**The next "While We're Waiting Weekend for Dads" is scheduled for May 4-6, 2012.  Click here for more information or to register!**
Written by The Sullivan Four at 4:29 PM

Email ThisBlogThis!Share to TwitterShare to FacebookShare to Pinterest
Labels: Tell About It Tuesday